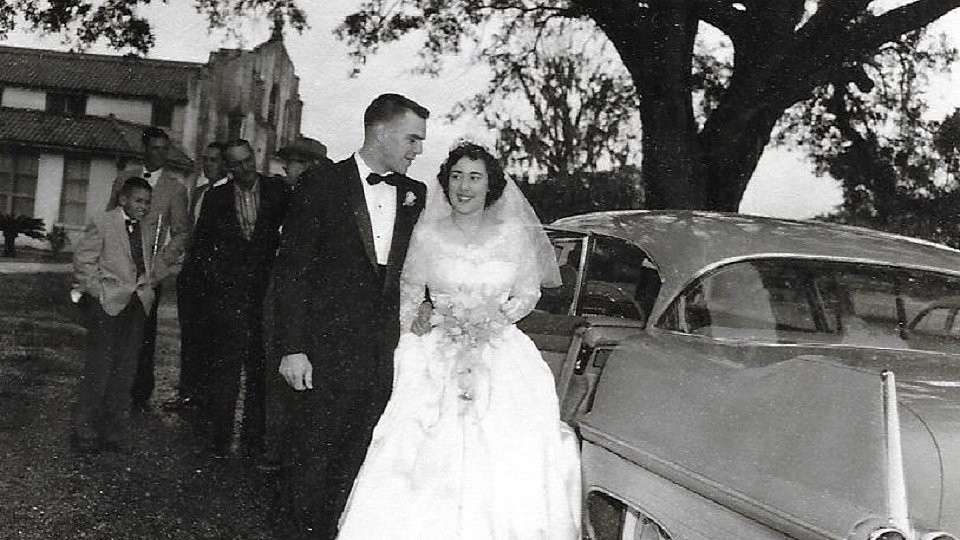 “I was in the second grade,” he said. “Her mother pulled up to the school in their car one morning and out stepped this beautiful girl.”

While their courtship didn’t begin quite that early, it wasn’t too long before they were in love and planning a wedding.

They married on Dec. 28, 1957 and just celebrated their 60th wedding anniversary, a few months after moving to Calder Woods in July 2017.

Lewis, 83, and Mary Ida, 79, grew up in Norco, La., a small town between Baton Rouge and New Orleans. They attended the same Catholic school, went to church at the same parish, and their families even became next-door neighbors when they were teenagers.

When Lewis enlisted in the Army in 1956, Mary Ida started dating another man and soon was engaged to marry him.

“When I heard about that I decided right then and there that I needed to go after that girl or the other guy was going to get her,” Lewis remembers. “I called her on the phone and asked her to marry me.”

Mary Ida called off her engagement. A year later, they were married at St. Catholic Church, surrounded by their loving families.

After Lewis discharged from the Army in 1960, he went to work for Shell Oil where both their fathers worked, like many men in the town.

Two years later, he lost his job in a layoff. He soon got another job offer from Goodyear in Beaumont, and they left Louisianan for Texas.

They raised their four children—sons Scott and Dean and daughters Celeste and Jan—in Beaumont. Mary Ida worked as a secretary at Kelly High School and in the credit department at Sears for a few years. Lewis worked 32 years at Goodyear before his retirement in 1994.

Their lives took a dramatic turn in 1983 when their oldest son, Scott, was paralyzed after a tragic car accident. A few years later, Mary Ida was diagnosed with Multiple Sclerosis. Despite her health challenges, they cared for their disabled son for 21 years until he passed away in 2004.

“A lot of people ask me how we did it,” Mary Ida said. “There was never any question in our minds. We always just did what we had to do.”

The couple loved to travel and even took Scott with them to Disneyland twice. They made other memorable trips together to Hawaii, Alaska and the Panama Canal. Lewis loved woodworking and Mary Ida enjoyed sewing. One year, they made 1,200 wooden puzzles to give away to local charities serving needy children at Christmastime.

“Despite life’s ups and downs, our faith and our love for God and family have kept us strong,” Lewis said. “You just keep on moving no matter where life takes you.”