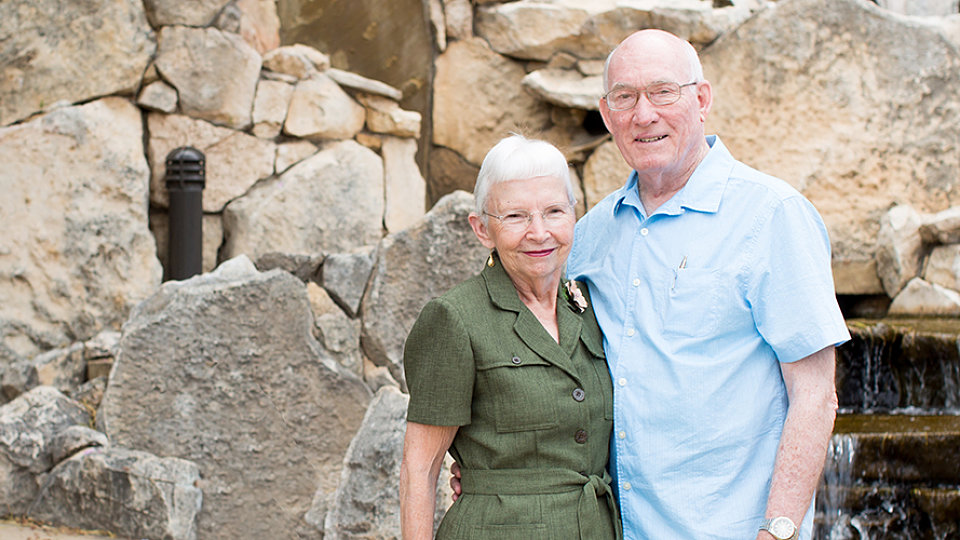 “I was 16 years old when I saw Walter working that day in the Woolworth’s five and dime, and I knew he was the man for me,” said Madeline Luther.  “I always say he met a million dollar lady at the 5 and 10 cent store.”

The relationship that started with a look has been sealed with a kiss. Buckner Westminster Place recently helped the residents celebrate their 80th wedding anniversary.

Westminster Place Life Enrichment Coordinator Tammy Combs surprised the couple with a private meal for them in one of the community’s guest apartments. It featured their favorite meal, lasagna, and a cake, both of which were donated by local restaurants. Music from the 1930s floated through the room as Frank and Madeline dined with Combs as their personal waitress.

“How many people get to celebrate their 80th anniversary together?” Combs said. “What a special occasion. I wanted to do something special for them.”

When the couple first wed, they lived in small four-room home that lacked hot water, heat or an indoor bathroom. “We grew up in the Depression but I loved every minute of our married life,” Madeline, 97, said.  “My job was to raise the family and I cherished how Walter would come home every night and say, ‘Hmm, everything smells so good.’”

The couple believes the key to their long marriage is two-fold: “We never went to bed angry,” Walter said. “I remember a preacher saying when I was 13 that when you argue, it is only the mean words that are remembered. I learned to just be quiet when we got real upset. I also remember a preacher saying that heated arguments are like tearing open a down pillow; you can try to pick up all the feathers but there are always some lying around later. Religion played a big role in our lives.  The Bible provides guidelines on how to live, how to treat one another.”

Madeline says the other secret is, “We kiss every day. I start off and kiss him in the morning and kiss him at night – and lots of times between. He is a good kisser!” she says with a laugh.

As they celebrated their union, the Luthers have much to reflect on and much to look forward to. They are grateful for both.

“We have had a wonderful life together,” Walter said. “We love each other and we believe it is important to reach out to our fellow man with a hug and a word of encouragement whenever we can.”