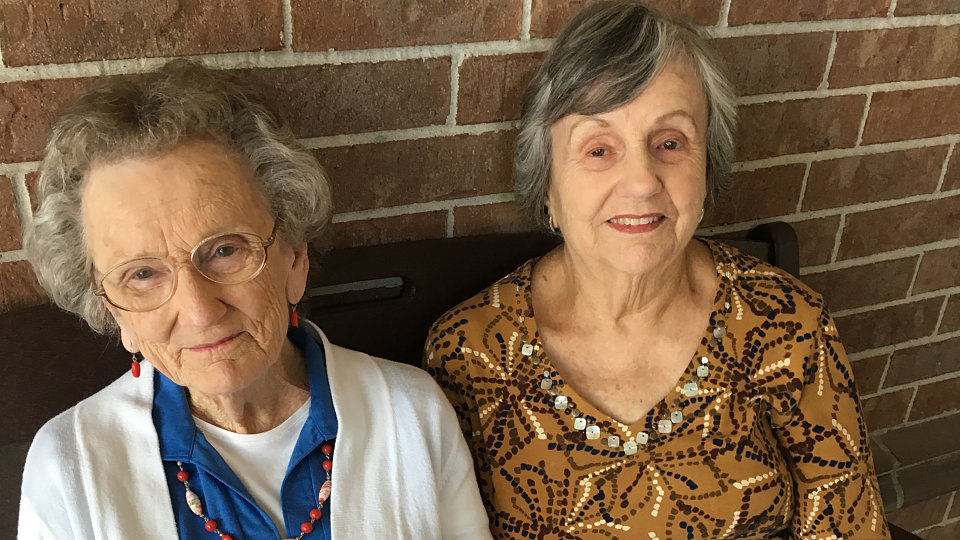 For the first time in more than five decades, sisters Beverly Hugghins and Nellen Brunson are living in the same city. Even better? They’re under the same roof.

The two celebrated National Sisters’ Day together at Parkway Place, the Houston senior living community where they both live. They say they’re closer now than ever before—and not just in distance.

“I never thought I would live just a building away from my sister at this stage in our lives,” Brunson said. “We always kept in touch, but our lives took us to different places over the years. We feel God put us back together in our hometown at this great community.”

Hugghins, 90, and Brunson, 85, get to see each other every day. Instead of catching up over the phone, they spend quality time together in person, looking at old pictures and reminiscing on the past.

“When we were younger our mother would pick up a woman at a Buckner community, and now we live in one,” Brunson said. “We’ve come full circle. We enjoy seeing each other as often as we can. We lost our oldest sister, so it’s nice to be together. I think our mother would be pleased with how things have turned out.”

Hugghins and Brunson grew up in Houston to a close-knit family and attended Houston’s First Baptist Church while it was still located downtown. After graduating high school, they both went on to attend Baylor University before getting married and starting families.

Hugghins, who lived the majority of her life in Houston and raised five children there, moved to Parkway Place after her husband passed away in 2015. Brunson, on the other hand, moved into the community in May. She moved around more than her sister, spending time in Dallas and Fort Worth, as well as 40 years in Monroe, La., where she raised three children.

“It’s inspiring to see the family connections come together at the community,” said Linda Fitzhugh, director of independent living at Parkway Place. “We are thankful they both chose to call Parkway Place home, and we look forward to seeing the new memories they build together.”

“It’s great to be back with my sister,” Hugghins said. “We do different activities at the community and attend different churches, but we find time to catch up or get lunch together. My sister is my best friend and to have her down the hall is amazing. A sisterhood is hard to describe, but no matter what, I know she will be there for me.

“We might not always agree, but we always love each other and we will fight to defend each other against anybody!”