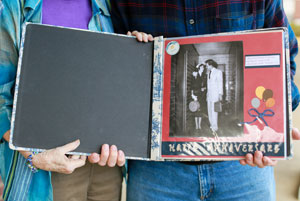 You’d think that after 60 years of marriage, a couple wouldn’t have anything new to learn on the subject, but marriage veterans Cliff and JoAnn Payne know better.

Although it’s been a lifetime, the Paynes continue to find ways to serve and appreciate each other. In fact, having a thriving marriage is so important to them that they regularly do things to enrich their relationship, like mentoring, reading marriage books and attending seminars.

“It gives me joy to work on our marriage,” JoAnn said. “We can just laugh together over the silliest thing you could ever come across. We sit around and laugh. At the breakfast table, he reads the funnies to me. There’s one, it’s an older couple, they’re a lot like us and we have a lot of laughs over that. I don’t know what makes us laugh but we find a lot of things that make us laugh in our marriage.”

Cliff and JoAnn talk about their courtship and marriage as if it were coming from one mouth. They finish each other’s’ sentences and defer to each other when one is at a loss for words. They met as children at church in Houston. JoAnn’s father was the pastor and Cliff’s father was a deacon.

They’ve been together for so long, they can hardly remember their first date.

“You invited me to a party,” Cliff said.

“I did? He remembers better than I do.”

They married after their first year of college, on Dec. 20, 1954, when JoAnn was 20 and Cliff was 21. She was at Baylor University and he was at Texas A & M University. Their beginnings were humble, living in small, cramped apartments and guest houses until they saved up enough money to buy their own house.

Their first son was born during Cliff’s senior year of college. They laugh as they remember the roaches that ran throughout their apartment and how when a north wind blew, it lifted the floor rug in their living room.

“We have had a lot of laughs, and all through the years, we have laughed together over many things. That has held us together. We can still laugh about a lot,” JoAnn said.

Although they had a lot of laughs, they weren’t without struggles as a newly-married couple. They learned quickly that JoAnn was better at paying bills but that she had a long way to go in developing her culinary skills.

“When you get married, you’re different people with different gifts,” Cliff said. “You wonder, ‘well, why can’t she be more me, why can’t he be more like her?’ God continually put people in our lives at the right time to pull us away from the problems and say, this is a better way over here. We had moved into a new church when we moved houses and the pastor of that church was just exactly what we needed.”

The Paynes were actively involved in their church and community. They learned early in marriage to rely on their faith in God to grow closer to each other.

“The secret of being close and loving was being close to God,” JoAnn said. “We never strayed away from him. He never left us. And whenever we got in bad times, we knew where to have to go, and we did. And he got us out of it. Everything goes back to God. God was the source that held us. Whenever anything didn’t go right, we went to him.”

They credit the first marriage enrichment class they took with laying the bedrock for a solid relationship and setting a precedent for how they spent their time together. They made it a priority to take weekends away from their children to reconnect with each other.

Cliff and JoAnn also found a lot of joy in serving together. From teaching English in China to helping in special education Sunday school classes, they found the more the served together, the more they grew to love people, each other and God. Even now, they live at Buckner Westminster Place, a senior living community in Longview, and they still find ways to serve each other and their neighbors.

“Both of us have a love for people,” JoAnn said. “Now I can see more and more why God was so determined to work with us because he wanted to use us for some things he had in mind. We’ve gotten a lot of joy out of it. Because both of us learned to love people in a way that’s warm and friendly, we wanted to be friends. And then he gave us an opportunity to do that.”

The Paynes said aside from learning to laugh and having a sense of humor with each other, the most important thing to remember in marriage is that each person has different strengths and weaknesses, and that each person is constantly changing.

“Recognize up front that both of you are constantly changing and the person you fell in love with is not there anymore,” Cliff said. “You have to continually fall in love with each other. That’s been one of the big things, is accepting the fact that we are changing, hopefully for the better, and trying to make those changes in the right direction. And just deciding we’re going to work at it. We’ve been together for a long time and we’re not going to let anything take us apart.”