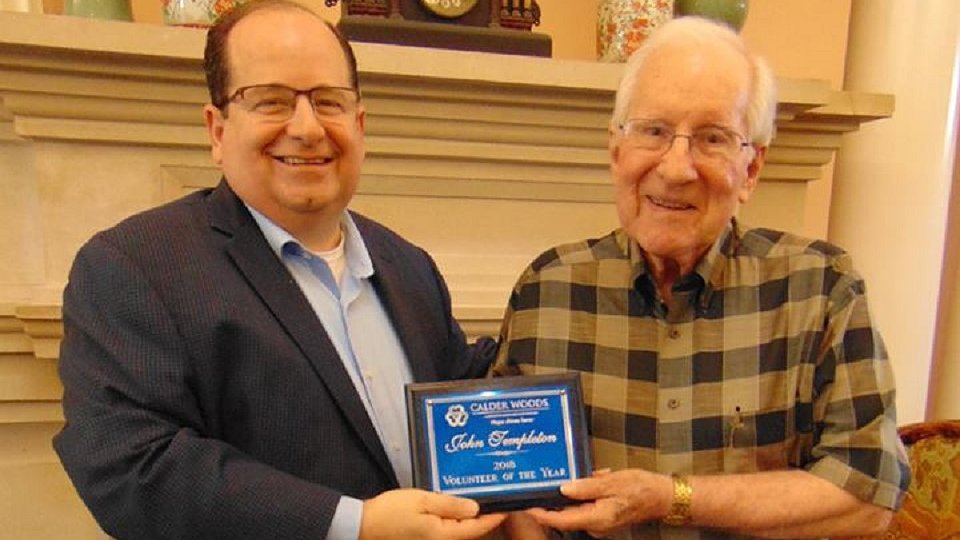 During any given week, you’ll find him leading the Calder Woods sing-along, helping Chaplain Fontenot during church services, facilitating Wednesday’s intercessory prayer session, counseling during the Alzheimer’s caregiver support group, providing entertainment during Thursday’s social hour or just lending a hand to a neighbor in need.

“Ever since he moved to Calder Woods, Mr. Templeton has been an integral part of this community,” said Ben Mazarra, executive director of Calder Woods. “He proves that moving to a senior living community isn’t about slowing down, but about getting involved and doing your part to help the community thrive. Recognizing him as our Volunteer of the Year was a true honor.”

For Templeton, though, volunteering is natural.

“It almost seems routine to me,” he said. “I just love people and like to see them happy. It’s so rewarding when I can do something for someone. I don’t have any hesitation about helping when I can.”

Templeton moved to Calder Woods with his now-late wife in 2009 after a longtime career at Texaco. He and his wife were married 65 years and spent much of their time in early retirement volunteering at the local hospital. It was his upbringing, Templeton said, that taught him to give back.

“Being involved in church life really motivated me to be aware of other people and find ways to assist their needs. Sometimes it’s as simple as talking to them and encouraging them. I’ve been blessed with good health, especially as a 91-year-old! My legs are still good, and I can just pop up and help someone whenever they need.” 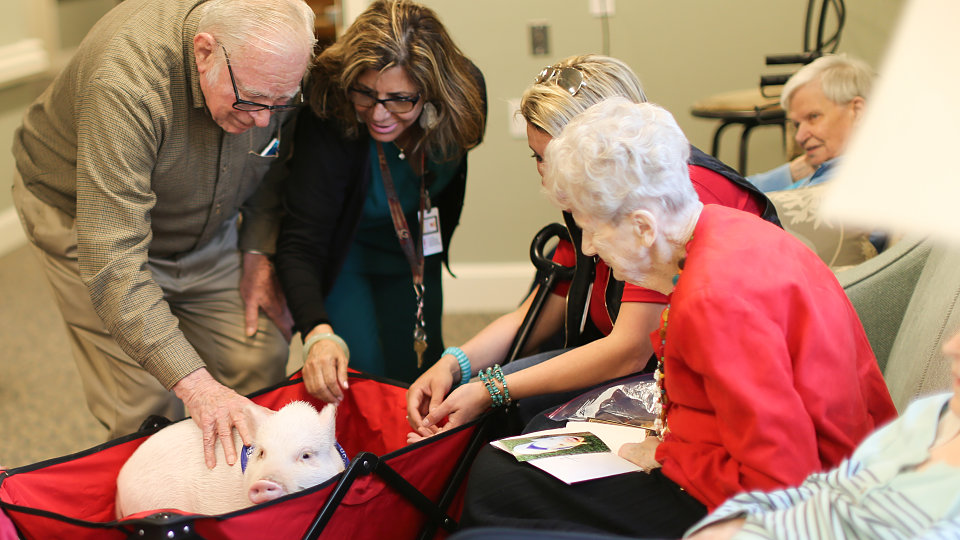 “The joy on these residents’ faces when they see Max is almost indescribable!” said Susan Phelps, executive director of Parkway Place. “Animals have a unique way of bringing out a childlike joy in senior adults, and to see them get so excited is truly heartwarming.”

Therapy pigs have proven to be a unique source of joy and comfort for senior living residents. As with any therapy animal, research shows they can help reduce anxiety and lessen symptoms of depression, particularly for seniors who have a history of working with or being around animals.

McPherson received Max as a gift when he was three weeks old and weighed just five pounds. Since then, she’s been training him as a therapy pig. He lives inside her family’s home, in a kennel, like any other household pet.

“He’s just like a dog, but smarter,” laughed McPherson. “He can sit, spin, kiss and shake hands. He’s quite the pig!”

McPherson keeps Max on a strict diet of fruits, vegetables and, as a special treat, Cheerios. She walks him in her neighborhood—on a leash—nearly every day. While he’s still growing, her goal is to keep him at a trim 50 to 60 pounds.

“The name Max means ‘one of a kind,’” McPherson said, “and Max is truly that to everyone who meets him, especially these senior adults.” 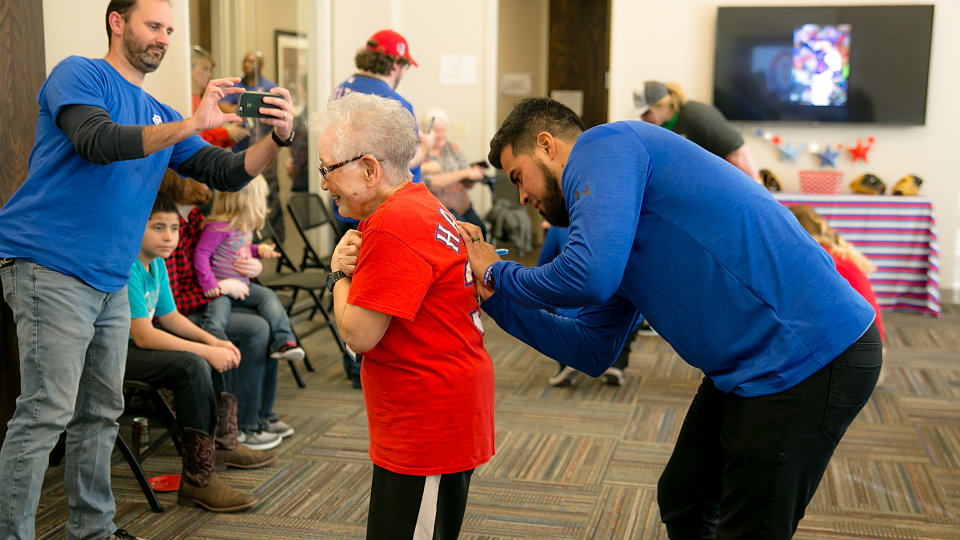 Residents of Buckner Westminster Place in Longview got to meet some of their baseball heroes when the Texas Rangers visited Buckner during their Winter Caravan. The visit was part of the team’s new partnership with Buckner International and its ministries across the state. 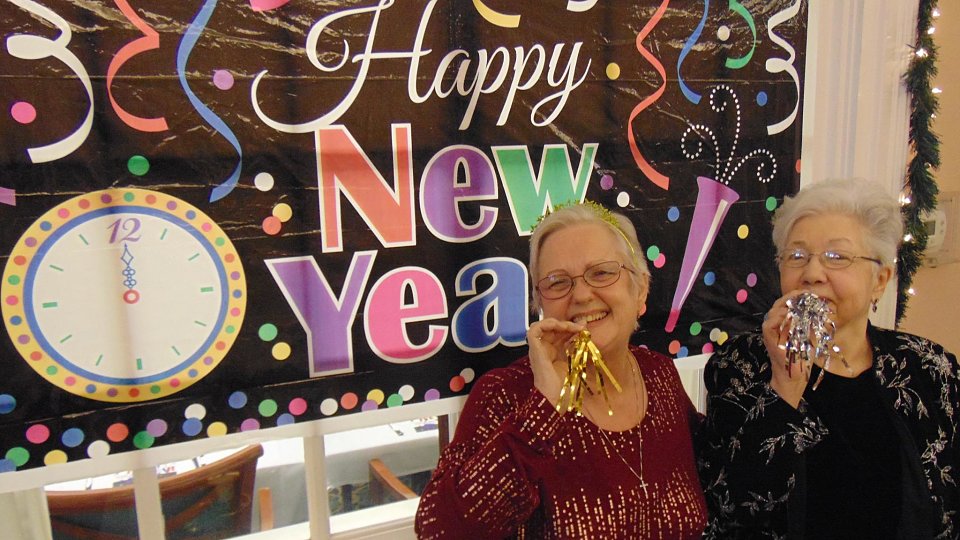 Residents at Calder Woods, a Buckner senior living community in Beaumont, started off 2018 with a bang! They gathered Sunday with friends and family for the community’s annual New Year’s Eve gala. 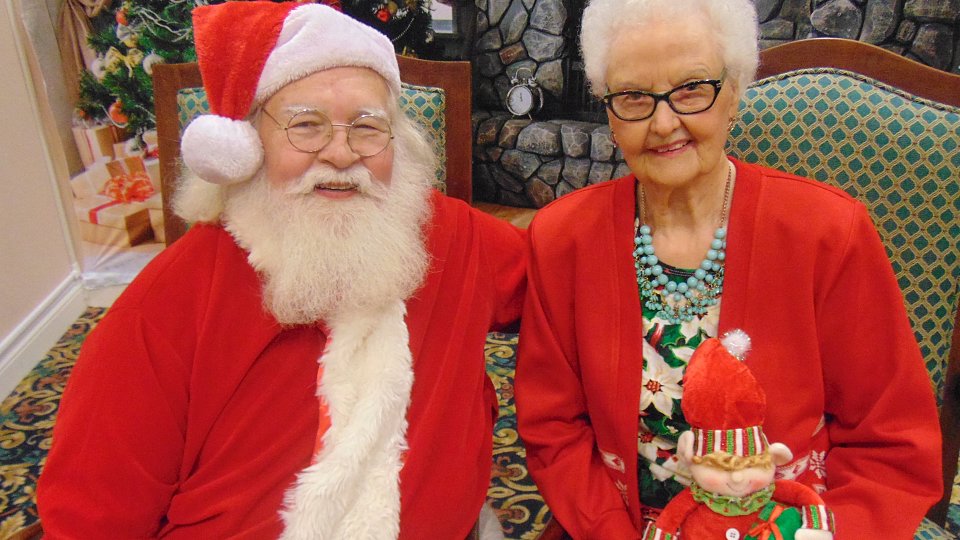 This year, Edna Buck, a resident of Calder Woods senior living community in Beaumont, celebrated the holiday season with her Calder Woods friends and neighbors. She’s pictured here at the community’s annual Christmas Open House. But when asked which holiday season she remembers most, it’s the 1945 season that most rings clear in her memory.

When Edna’s husband stepped off the train at 10 p.m. one night the week before Christmas in 1945, they didn’t even recognize one another.

Raymond Buck was one of hundreds of thousands of GI’s trying to get home in time for Christmas that year. The war was over, and they had survived. Everyone had plans, lives and families to start, and dreams to bring to life.

Thinking he would be in uniform, Edna had eagerly scanned the face of each military man who disembarked.

He remembered noticing two women wearing the same coat—Edna and a friend who’d accompanied her—but in the excitement of the moment he somehow failed to recognize her.

Disappointed, Edna was determined to await the next train at 12:30 a.m.

Raymond took a cab to Edna’s aunt’s house, so her uncle went to fetch her from the station in his car.

She almost fainted, then she ran into his arms.

At her mother’s house in Lumberton, Edna had been sick in bed with the flu, but when she got word that Raymond was coming, she got up, washed her hair and got dressed.

She took a bus to Beaumont.

The couple spent Christmas at her grandparent’s home in Pineland.

Her brother, also a soldier, had made it home as well, and the family was ecstatic to have everyone home, alive and together.

“We had a big tree and big dinner,” Edna Buck said. “Everybody came and brought stuff.”

She gave her husband new clothes that we all too big for him; he’d lost weight after being wounded. Raymond gave his wife French perfume—“the real stuff.”

Tears came and her voice broke when asked what she remembers about that Christmas.

This article originally appeared in The Beaumont Enterprise. 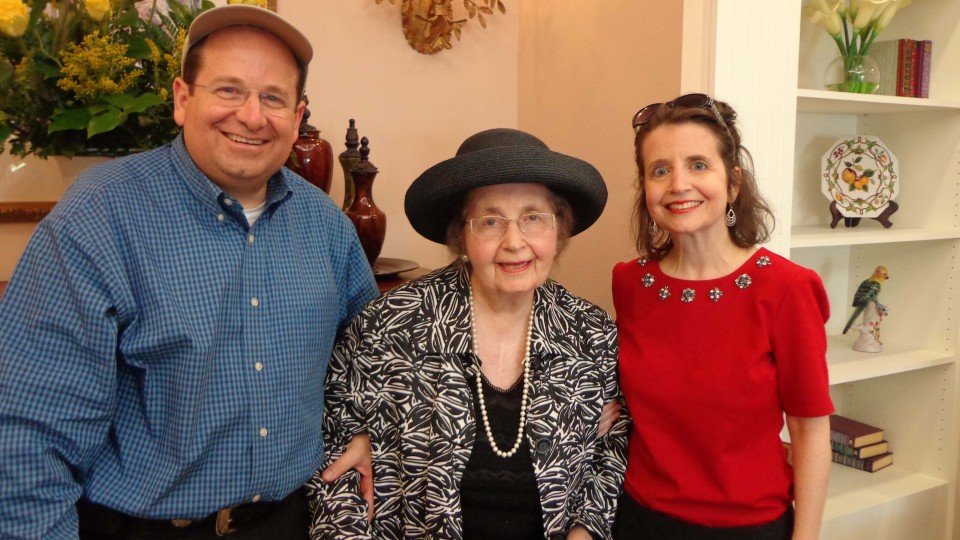 BEAUMONT, Texas – Not many people go to work every day and see their mom. Ben Mazzara, executive director of Buckner Calder Woods, says he’s an administrator from 8 a.m. to 5 p.m. but before 8 and after 5, he’s family. His mom moved in several weeks ago and now “every day is Mother’s Day.”<!–more–>

His 84-year-old mother had a stroke about six months ago while on the waiting list for a spot at Calder Woods. She’s in skilled nursing as she rehabilitates but she told Mazzara that after all she’s survived in her life – including a German bombing during World War Two in the Italian village she grew up in and Hurricane Carla in Galveston in 1961 – “no stroke is going to get me down.”

Mazzara, the only son in the family, is very close to his mother. His fondest memories are going on family cruises and going to church together. His parents were both born and raised in Sicily, Italy, so he grew up hearing them speak Italian around the house. He loved hearing stories of their home country.

Mazzara was also very close to his grandparents. Growing up, he visited his aging grandmother every day at a nursing home in Galveston. His father visited her in the morning; his mom visited in the afternoon; and Ben visited in the evenings.

“I had the grave yard shift,” he joked. “But I was what they call a ‘late in life’ child, so I was used to being around senior adults.”

One day, the executive director of the nursing home approached Mazzara and told him he should seriously consider getting a license to operate a retirement community. The director saw his passion and dedication to his grandmother, and at the time, he was a hospital administrator, so it wouldn’t have been a huge stretch.

Mazzara decided to go for it. He sat for the boards and 20 years later, he still loves every minute of it.

“I don’t look as this so much as a job as it is a ministry,” Mazzara said. “My favorite aspect is that we’re a faith-based Christian ministry. My mom loves God so much and she is truly devoted to her faith. It made the decision easy to choose Calder Woods.”

As his mother recovers from the stroke, he is hopeful she will be able to talk and walk again. But most of all, he’s looking forward to his mother’s Italian cooking.

Another reason Mazzara chose Calder Woods is because of its U.S. News five-star rehabilitation facility.

“There’s such a stigma attached to nursing homes and nursing facilities. We need to invite people from the outside to come in. If they look at Buckner, they’ll see we are a family and we exceed minimum standards.”