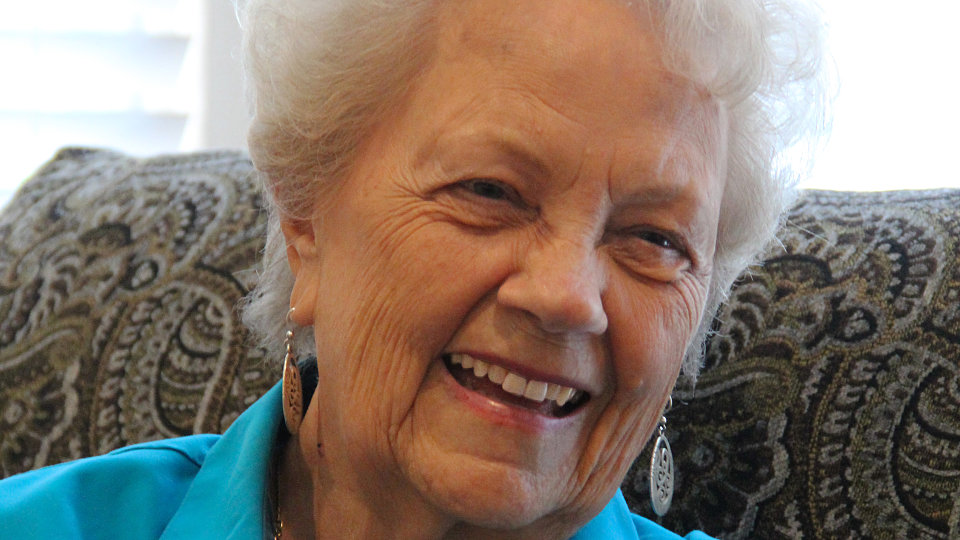 86-year-old Joan Haggard arrived at Parkway Place just days after losing everything to Hurricane Harvey. This is her story.

Joan Haggard’s weathered tan journal sits unassumingly atop the kitchen table in her new Parkway Place apartment, next to a neat stack of papers, files and phone numbers—the essentials salvaged from her flooded Houston home. In black ink and perfect cursive, the journal tells pieces of the 86-year-old widow’s Hurricane Harvey experience.

Like many, Haggard lost nearly everything in the historic storm. Family mementos, tokens from her 62-year marriage and items locked inside a “waterproof” safe—all ruined by the four feet of water that sat in her home for more than a week. If Haggard were to stand at the front of her home today, she could see all the way through the back door.

“It’s different,” Haggard said. “You never think of this happening to you.”

During the storm, Haggard stayed with her son’s family in Bellaire. The 40-year-old house had never flooded before, but a few days into Harvey it began taking in water. The water, which rose to more than a foot, forced Haggard and her family to move to a neighbor’s second story garage. There, she slept several nights on the floor, underneath the pool table.

“Otherwise, it’s not so easy for an 86-year-old to get off the floor!” she laughed.

Haggard, who grew up in West Texas, has lived in Houston for 48 years. She’s raised three children, buried one son to Lou Gehrig’s disease (ALS), and for 47 years was the sole caregiver for her husband after a plane crash left him paralyzed.

Still, most would characterize Haggard by her unwavering faith and gentle optimism.

“Life is okay,” Haggard said. “You go on. You survive, and here in Houston I think we all come out better. We can choose to.”

Haggard was the first of more than 15 residents to move to Parkway Place as a direct result of Hurricane Harvey. Some stayed at the Houston senior living community only temporarily, others made plans to call it home permanently. Haggard says they share a unique bond.

“When I walked in, I knew it was okay,” she said. “I felt like I was family, like I was right where I belonged.”

Fellow residents, Haggard remembers, joked that living at Parkway Place during Harvey was like living on an island: all the surrounding areas were covered in water.

“They said it must have something to do with the retired missionaries who live at Parkway Place,” laughed Haggard.

Already, Haggard has made herself at home at Parkway Place, jumping in to ongoing Bible studies and activities like Bingo, which she regrettably didn’t win. Her longtime friend, Betty Beard, moved to Parkway Place shortly after Haggard. The two live just two doors down from each other.

Since the flood, Haggard has only visited her home once. Even then she had to wear a surgical mask to keep from inhaling dust and debris.

Around her wrist, Haggard wears a white rubber bracelet with the word “hescycha” printed in blue. The word is Greek for stillness. It’s a practice, Haggard says, she clings to now more than ever.

“I’m learning to be still and listen to God,” she said. “We talk to him so much in our prayers, but he says to just be still and know that he is God. I lost things, but they’re just things. I’m very blessed.”

The one thing she made sure to take with her to Parkway Place? A framed photo of her husband that had been hanging in their bedroom. She wanted him to be with her.

“I think he would like it here,” she smiled.