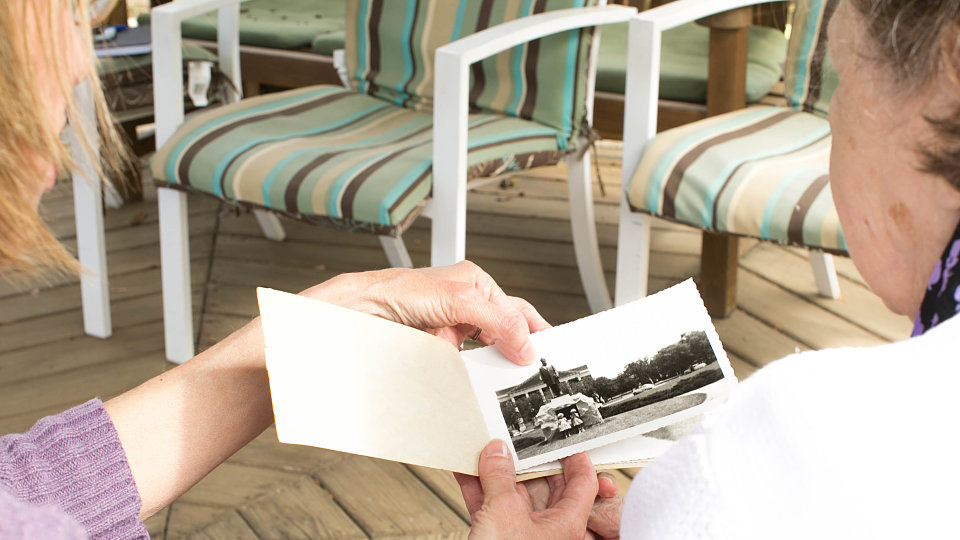 The paper cover of a rectangular Snapfolio book from Edwards Photo Service in Tyler, Texas, is worn soft from years of being passed from box to box, hand to hand. In sprawling cursive, a simple hand-written note in the corner reads “Buckners, when we got kids for vacation.”

Inside the little book live six black and white photos showing the heart Ollie Rogers, a young mother of two and wife of a school administrator, had for children, for Buckner and for the Lord.

Today, more than 60 years after the photos were taken, Rogers’ story has come full circle.

She and her daughter, Jan Gronewald, sit outside Buckner Westminster Place where the now 94-year-old Rogers is a resident. They share smiles and reminisce over these photos from when, for one week each summer, the young family would open their home to a child from Buckner Orphans Home. Rogers led the partnership between Buckner and her church, Bethel Baptist near Tyler, to help serve vulnerable children.

“We drove from rural East Texas to Buckner in Dallas to get the children, share clothing and meet the needs they had,” Gronewald said. “Mama was always faithful in her service to God through teaching the Bible and helping those in need, especially children.”

What was then Buckner Orphans Home has now grown into an international operation, serving vulnerable children, families and senior adults across seven countries and three continents. Rogers’ own ministry has grown too. Her children are married, she’s the grandmother to three granddaughters and one great-granddaughter, and her legacy of serving the least of these spans more than eight decades.

“When I think of that Bible verse ‘Jesus went about doing good,’ I think of my mother,” Gronewald said. “She was always faithful to serve the Lord through teaching the Bible. She was hands-on, telling people about The Lord, helping others and visiting those in need.”

The Rogers family had close ties with Buckner, as Ollie and her husband were good friends with Harold Hime, who at the time served as the Buckner Orphans Home administrator. Hime later left Buckner to become a missionary in Alaska.

Gronewald remembers one girl, Linda, who stayed with them when she was four or five years old. Linda was Gronewald’s age and slept in her bed. The family only had one bathroom to share, but gladly made the tight quarters work.

“Mama would cook breakfast and wash the clothes and hang them on the line,” Groenwald remembers. “We did do a few special things like going to the circus, but mainly we just let them see how a regular family lived just to give them that experience. It was about sharing our everyday lives with them. And we’d of course take them to church when we went too.”

Growing up on a farm, Rogers was a naturally hard worker. She taught elementary school for nearly 30 years and always made sure she and her family were at church Sunday mornings, Sunday nights and Wednesday nights.

“When people ask who led me to the Lord, I have to say my mama,” Gronewald said with a smile. “And she led a lot of other people to the Lord too. She was always teaching the Bible and involved in missions. That’s what we saw.”

Outside Rogers’ door at Westminster Place hangs a plaque from First Baptist Church Kaufman commemorating her 50-year tenure as a Sunday school teacher there. She taught first and second grade Sunday school classes until she could no longer climb the stairs to the classroom.

“When I was a little girl she taught the adult ladies,” Gronewald said. “I always remember Mama wouldn’t wear a hat to church, even though some of the ladies did, because she didn’t want anybody in her class to feel like they didn’t have enough or weren’t dressed up enough.”

Buckner wasn’t the only ministry Rogers served. Gronewald led a Spanish-speaking vacation Bible school for the community, served with the community mission association for Smith County and was an active member of the Gideons International Ladies Auxiliary. Even in retirement, Rogers called Bingo at the local senior living community, organized and delivered Meals on Wheels, and led the Woman’s Missionary Union.

“She’s always been a courageous woman,” Gronewald said. “Looking back, she was brave to get up and lead and speak, but she was quiet about it.”

Gronewald carries on her mother’s legacy by serving at church and volunteering regularly in the Longview community, including Westminster Place where she comes at least once a week to play piano in both assisted living and memory care. Gronewald’s son-in-law, Allen Conley, is on the Westminster Place staff as director of environmental services.

“We are honored to have Ollie, Jan and Allen as part of the Westminster Place community,” said Wes Wells, executive director of Buckner Westminster Place. “Their family embodies what faithfully serving the Lord looks like, and having this special piece of Buckner history right on our campus is truly inspiring.”