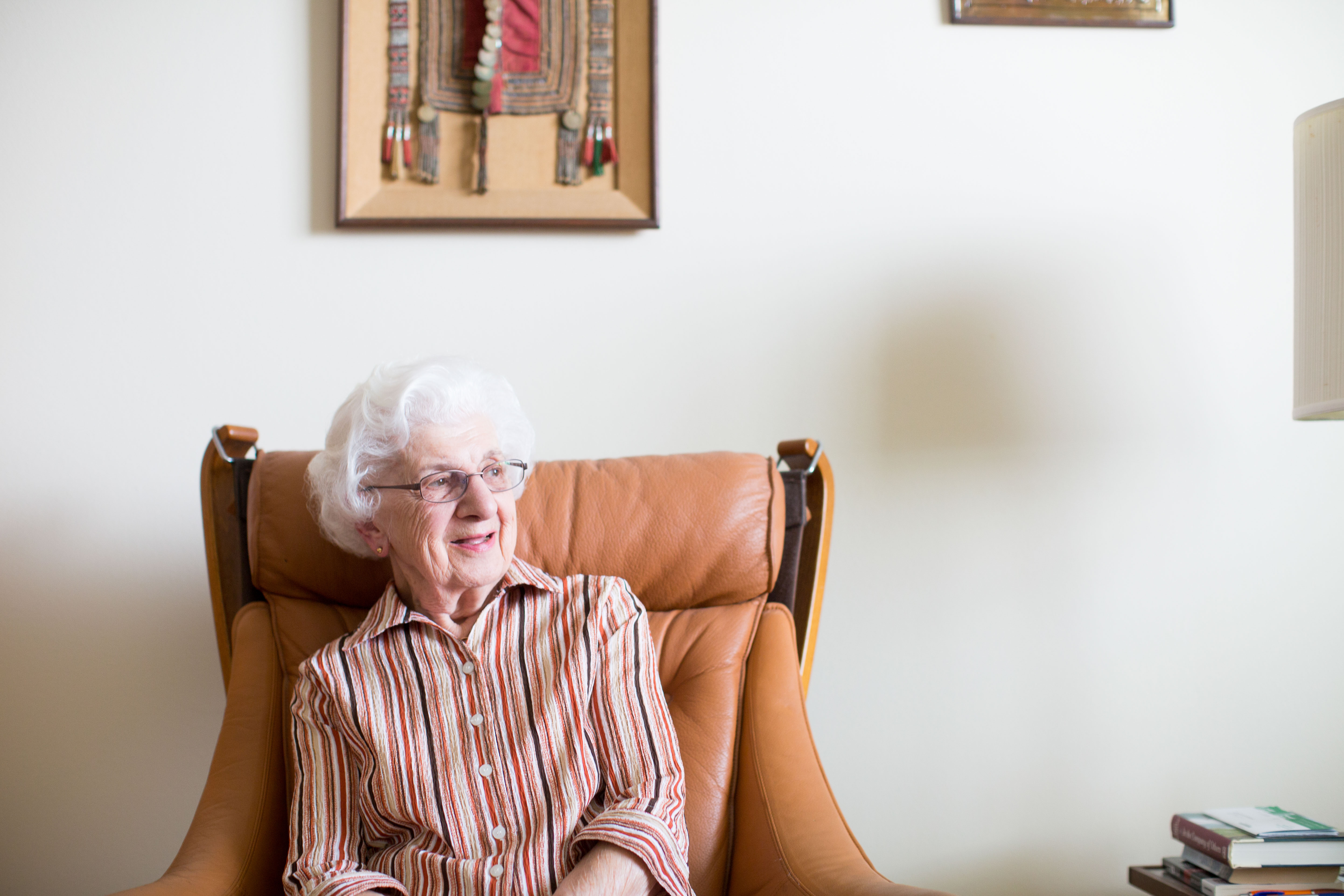 Story and photos by Chelsea White

Buckner Villas resident Anna Gatti has lived an exciting, adventurous life, and at 91, she’s nowhere near slowing down. She has lived all over the world – Lebanon, Belgium, the Dominican Republic and Israel to name a few – but now she spends her time and enjoying life with her friends at Buckner Villas.

Gatti’s husband was in the diplomatic service for 33 years, which led to some exciting adventures – and cultural pitfalls she still laughs about today.

“I was not very diplomatic,” she says, laughing. “My husband was the diplomat, I was not. [The French] would ask ‘How do you like French food?’ And I’d say, ‘Oh, it’s delicious, but you know, I think Belgian food is even better,’ and my husband looked at me with daggers.”

Belgium was their first post, and it’s still her favorite, mostly for the chocolate and french fries. Gatti was a French major in college and thought she was fairly fluent in the language, but it took about five months of living in Belgium until her friends could finally understand what she was saying.

“That was quite a blow to my pride,” she says, smiling. “I thought I was so good, but that’s when I really learned to speak French. It was a very small town, very few people spoke English, so I had to speak French. I’m so grateful for that.”

Gatti has three sons, all of whom were born overseas – one in Germany and the other two in Lebanon. For the most part, her boys loved living overseas and spending their childhood doing things most people only dream about.

While the Gatti family lived in Lebanon, a civil war broke out. They used to stand on their balcony and watch the trace of bullets whizz by. Soon, it became too dangerous, and Gatti and her boys were sent to
live in Rome for four months.

Lebanon wasn’t their only experience with conflict. The Gattis lived in Syria when the Six Day War erupted. It was the only time Gatti can remember being “scared to death” while living overseas.

They were at the consulate in Aleppo and knew it was only a matter of time before something happened. But it happened suddenly, and the Syrians quickly closed the borders.

Women and children were forced to evacuate, and the Gattis fled Syria. However, the border guards would not accept their diplomatic passports to let them out.

“There was this nasty Syrian major that did not like Americans and made no bones about it,” Gatti says. “He told my husband, who spoke Arabic, in no uncertain terms what he thought of Americans.”

The major made them move the car away from the barrier. As they slowly rolled back, young children and soldiers on the barriers pointed the machine guns at the car and laughed.

Finally, another Syrian army captain appeared out of nowhere and started talking to her husband. He motioned for him to follow him, and they went into the office at the barrier.

“He called whoever the head honcho was in Damascus and said, ‘I’ve got an American consul here; his wife is pregnant’ – which was a lie – ‘their baby is crying’ – my 6-year-old was not crying. He finally got permission from them to open the barrier and let us through.”

By the late 70s, the Gattis were stationed in Paris. One of of her husband’s employees was from Texas and told him he ought to think about retiring there – specifically Austin or San Marcos. So when the time came, they flew to Texas and looked at “about 8 million houses.”

While they were looking at houses, Gatti could not understand why all the houses had repair trucks in the driveways so she asked the realtor.

The realtor had no idea what she was talking about.

“I told him, ‘Practically every driveway has a truck,’ and he started to laugh. He said, ‘Those aren’t repair trucks, they’re pickup trucks. They can’t have a horse in Austin, so they have pickup trucks.’”

While she may not be living an exciting diplomatic lifestyle anymore, Gatti has adapted to living in Texas and loves living at Buckner Villas. The other residents and staff are just like family, she says.