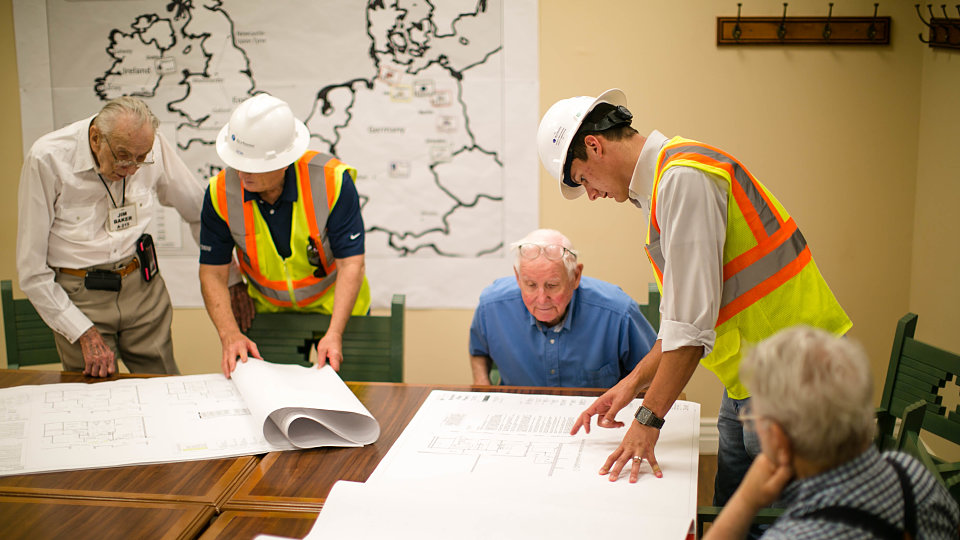 When Howard Wilson graduated Michigan State University with a degree in electrical engineering and a commission into the U.S. Army Reserves, America began developing the hydrogen bomb.

Ray Horton worked as an apprentice carpenter when department stores sold Tupperware for the first time.

Engineering isn’t just what they did; it’s who they are.

Today, these Buckner Villas residents in Austin are dusting off their hard hats thanks to Hill & Wilkinson General Contractors, the Richardson – based construction company managing the GreenRidge Independent Living expansion project. The construction crew regularly visits Men’s Coffee, giving residents an opportunity to examine the latest drawings of the expansion.

When not talking to the crew about the plans, many residents frequently gather at a fourth-floor window to watch the construction in real time.

“Watching the construction and visiting with the guys is the best entertainment in the world,” said 97-year-old Owens who worked in engineering for 48 years before turning in his license at age 85. “They’re doing it well. They don’t know we’re watching them and judging them.”

The meetings began when several residents approached Buckner Villas’ executive director, Doyle Antle, and asked if Hill & Wilkinson would be willing to meet with them. More than 20 residents attended the first meeting.

“They’re pretty involved,” said Bob Sharp, superintendent for Hill & Wilkinson. “Everyone’s curious. Most of them just have questions for us.”

Sharp and Zach Sienkiel, a project engineer, brought armloads of blueprints and renderings for the men to review during the first meeting.

“We usually get a lot of ‘Y’all almost done?’ and ‘Hurry up!’” laughed Sienkiel. “But for that first meeting we showed up with nothing really on our agenda and just answered questions the whole time.”

More than anything, these meetings provide a space for residents to be heard in a field they may feel has forgotten them.

“Construction ran through my career the whole way through,” said 86-year-old Gloyna. “I’d go back in a minute if I could, but age prevents me from it. I recently saw this ad in the paper for an assistant project manager, and if I were 20 years younger I’d apply for the job!”

Through the years, these men have watched their craft change dramatically. From the integration of technology to the acceptance of women, today’s engineering firms hardly resemble those of the mid-20th century. Still, the bond these men share with their modern counterparts is unshakable.

“An engineer is a weird guy, or girl now!” Owens beamed. “They have to know how it works. It’s a passion with them. And they have to know how to tell somebody else how to do it. I think engineers are better today than we were. Now they’ve got computers in their pockets!”

Horton, 87, is especially invested in the expansion project. His son, Sonny, is the contractor whose company is responsible for pouring all the expansion’s concrete.

“I’m very proud of him,” Horton said. “He listened. He paid attention. I taught him how to work.”

For the next generation of engineers, the men advise to, above all, do the job and do it well.

“Details make or break the job,” Gloyna added. “Anyone can lay on roller brush construction jobs, but the one who pays attention to detail is the one who gets the job done.”

“I think proactive is a good word,” Antle said. “What they’re doing is keeping the residents involved from a controlled environment. Doing it this way enables the residents to talk about it and spread the word about safety. They’ll watch out for each other.”

The GreenRidge expansion is set to finish in 2018 and will feature underground resident parking, an expanded dining room and beauty salon, a full movie theater, an upgraded café and 69 new independent living apartments. Hill & Wilkinson is also managing the Buckner Calder Woods expansion in Beaumont, scheduled to open in early 2018.