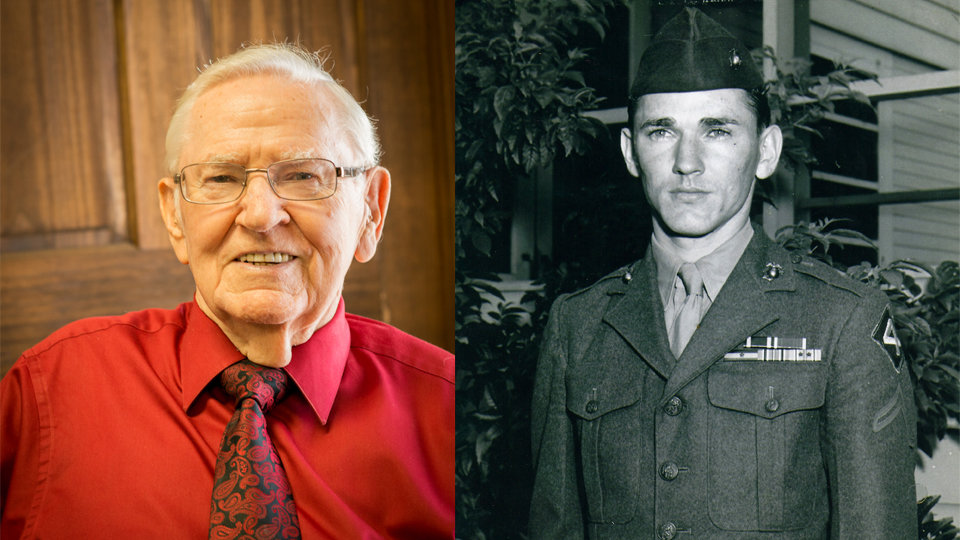 On May 29, 1944, Joe Griffin and the rest of the 4th Marine Division sailed for Saipan, a Japanese stronghold in the Marianas Islands during World War II. There, the United States military would win their first battle on Japanese territory that had not been added prior to Japan’s aggressive expansion in 1941-1942.

The victory came at great cost, however. Japanese troops established what they believed to be impenetrable high ground on Mount Tapotchau. U.S. forces fought through areas nicknamed “Death Valley” and “Purple Heart Ridge” for the many casualties suffered there. In all, more than 3,400 American soldiers died in the battle and another 10,364 were wounded. Griffin suffered wounds from rounds of rifle fire as they took cover in a self-dug foxhole.

“Many ask me if I was scared during the battles I fought, but I was not; I was just concerned about the odds of dying,” Griffin says. “You are facing a reality that you may die. You may not make it to the next day, and you may not see your family again. When you are landing and there are large artillery shells hitting boats next to yours, your eyes grow wide as you think the next one might hit us, but you have to keep fighting. All you can do is keep fighting. The will of God is the only hope you have for staying alive.”

As we celebrate our independence this July 4, we remember that freedom came at a cost. Individuals were willing to sacrifice – even to the point of paying the ultimate sacrifice – so others could experience freedom.

Christ was willing to walk a very similar journey. Throughout what is known as the passion of the Christ – the suffering he experienced leading up to and including his death – he knew what he had to do. If all people were to have access to a relationship with God, he must die. So he did it.

It is for freedom that Christ has set us free. Stand firm, then, and do not let yourselves be burdened again by a yoke of slavery. –Galatians 5:1