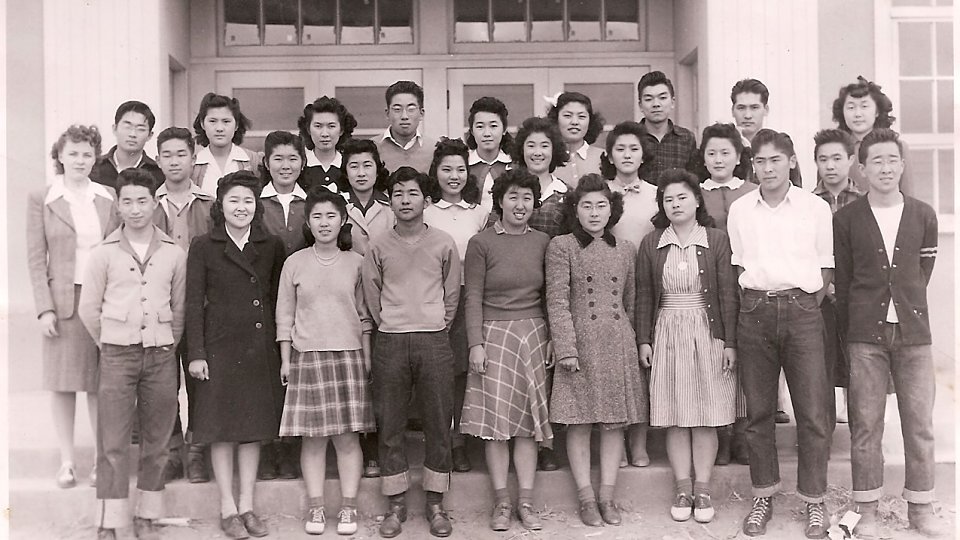 But on February 19, Takehara’s life became anything but normal.

The order, which came 10 weeks after Japan bombed Pearl Harbor, permitted authorities to remove from the West Coast anyone deemed a threat to national security. Evacuees included Takehara, her family, and more than 100,000 men, women and children of Japanese ancestry.

“We were American citizens, and that’s what’s so sad,” Takehara said. “But we looked like the enemy.”

Today, Takehara, now 91-years-old, lives at Parkway Place in Houston. She travels the country with her daughter, Anne, delivering a presentation about how WWII affected their family and teaching audiences to be sensitive to people who look differently.

“We built the presentation around four generations of women,” Anne said. “My grandmother who was born in Japan and came to the U.S. as an infant, my mom who survived the internment camps, me who was born and raised in small towns where we were the only Asian family in town, and my daughter who was born in Houston, the melting pot of humanity.”

After the order was issued, the Takehara family had less than three days to consolidate their possessions into one suitcase, leave the life they knew and relocate to the Santa Anita race track 20 miles from LA. In August, they were moved inland to the Amache internment camp in Granada, CO.

“The evacuation was the hardest on my parents,” remembers Takehara. “I was just a teenager, so all we were concerned with was trying to stay with our friends.”

At Amache, Takehara lived in barracks with dirt floors and sealed windows, four families under one roof. The summers were stifling and the winters freezing.

Despite all the upheaval she experienced, Takehara feels no resentment even 75 years later.

“That’s a question that’s asked me all the time, how come I’m not angry or resentful,” Takehara said. “But it was my parents. They felt that going to camp was something we had to do, and we had to do it with dignity.”

At 18, Takehara graduated valedictorian from Amache Senior High School. The speech she delivered from the camp’s crowded quarters would later be read on the floor of the U.S. Senate for its patriotic call to hope even in trial.

“Can we the graduating class of Amache Senior High School still believe that America means freedom, equality, security and justice? Do I believe this? Do my classmates believe this? Yes, with all our hearts, because in that faith, in that hope, is my future, our future and the world’s future.”

-Excerpt from Takehara’s graduation speech, entitled “America, Our Hope is in You.”

Not long after Takehara graduated, her father moved to Cleveland where he interpreted Japanese bombing maps. She remembers being greeted by armed guards when she went to visit him.

“He did that and he never regretted it,” Takehara said. “My parents never said anything against the United States because they felt like this was something we had to do.”

Takehara later met her husband, Ken, on scholarship at Simpson College in Iowa. He had just completed service with the 442nd infantry, an Army regiment made almost entirely of Japanese American citizens.

“Ken doesn’t remember meeting me because at the time all the colleges were all women and when these guys came back in their uniforms they just thought they were all wonderful and got lots of attention,” laughed Takehara.

While Takehara’s life was undeniably shaped by the war, she would not let it define her.

She taught school for more than 30 years and made a conscious effort to provide her children with a normal upbringing.

“My parents’ goal was always to fit in,” Anne said. “They were just like any other parents. We never felt like we were raised any differently because of our heritage. We never talked about it. I don’t even think I knew until I was much older. They truly were members of the silent generation.”

Still, it’s her mother’s example of strength, dignity and respect that Anne most hopes to pass on to her own children.

“She’s my role model,” Anne said. “Here I am 65 years old, and mom is 91 and still active. She continues to be an inspiration. It’s so good for her to have these opportunities to still stand on her own two feet and give her presentation.”

Takehara feels grateful for the experiences she’s had and the ways her story can influence people today.