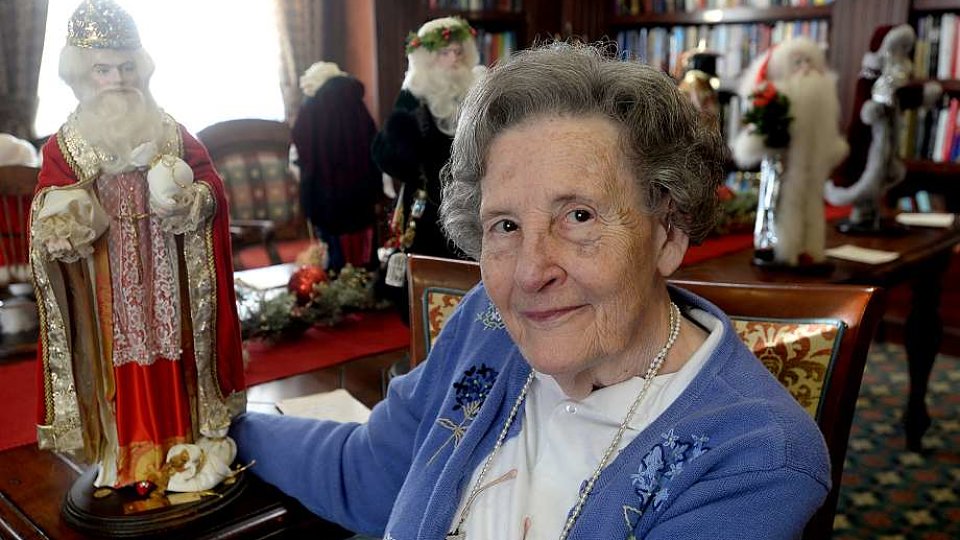 Christmas, as anyone with fingers clawing at wrapping paper understands, is the celebration of the birth of Jesus in Bethlehem.

When you pare away the myths, you’re left with what amounts to coercion – of the positive type – to reward good behavior.

A collection of 10 iterations of Santa Claus is on display at the Calder Woods retirement center‘s library, acquired and donated by one of its residents, Evelyn Lord, who once served as mayor of Beaumont.

The collection, created by Carleen Faucett and Jane Covington over the course of 10 years – one Claus per year – is perhaps one of seven in the hands of private collectors. The makers kept a set for each of them and the rest went to “subscribers,” Lord said.

“In western civilization, it seems a necessity to have a figure who rewards the good,” Lord said.

As a girl growing up in Boston, Lord remembers receiving a lump of coal a time or two in the toe of the stocking she hung by the chimney with care.

That helps to explain the figure of “Black Peter,” a fearsome-looking traveling companion of the good Mr. Claus. Black Peter kept the record books. And he had a quiver full of switches for the bad children.

His record book was titled “Das Kinder Verboten,” which loosely translated means, “No soup for you.”

Ancient Russia had its version in a figure called “Father Ice,” whose power to withhold reward from the bad-behaving is cold. Really cold cold.

“Father Ice turned a screaming girl into a pillar of ice,” reads a small pamphlet with Lord’s Father Ice figure.

The medieval Santa Claus, from the early 12th century, notes that St. Nicholas had been a saint for 300 years and a legend for 600 years previously.

He had the ability to fly, akin to the power of Odin, the Norse god. It is along one of those parallel tracks that the pagan mixed in with the birth of Jesus and his redemption for mankind on the cross in Jerusalem.

There is no consensus of what Saint Nicholas might have looked like, but scholars place him somewhere in Asia Minor, the area of the seat of the Byzantine empire.

Another figure, this time of a woman, is La Befana, who rose in Italy. Her legend is that she was invited by the wise men to witness the birth of Jesus, but she was reluctant, claiming she still had cleaning chores, which is why she is shown with a broom.

La Befana soon realized what she missed and to make up for it, she took gifts of fruit to children.

Lord, who last week turned 90, remembers an early Christmas when her parents surprised her with a big doll she wanted and her brother got a fire engine he could ride. When the gift wrap was pulled away, there was the doll, seated in the fire engine.

“We both got what we wanted,” she said.

Lord’s collection even includes a Mongol-Asian Santa Claus, who was brought to the East by the explorer Marco Polo in the early 14th century to the region ruled by Kublai Khan, grandson of Genghis. The Chinese Revolt in the late 14th century put an end to Santa in the East.

Kris Kringle is there, courtesy of the Germans and the name comes from Christkringl, the Christ Child.

On Christmas Day, Lord said she will be content to sit with her cat, Chloe. She will join the rest of her Calder Woods community for lunch and her collection will be on display, each adorned in rich vestments, until early January and then back they go to their place of safety until next Christmas.

“Adults understand Christmas,” she said. “You need a mythical figure to reach a child.”

Story courtesy of Dan Wallach and photo courtesy of Kim Brent, both with the Beaumont Enterprise.