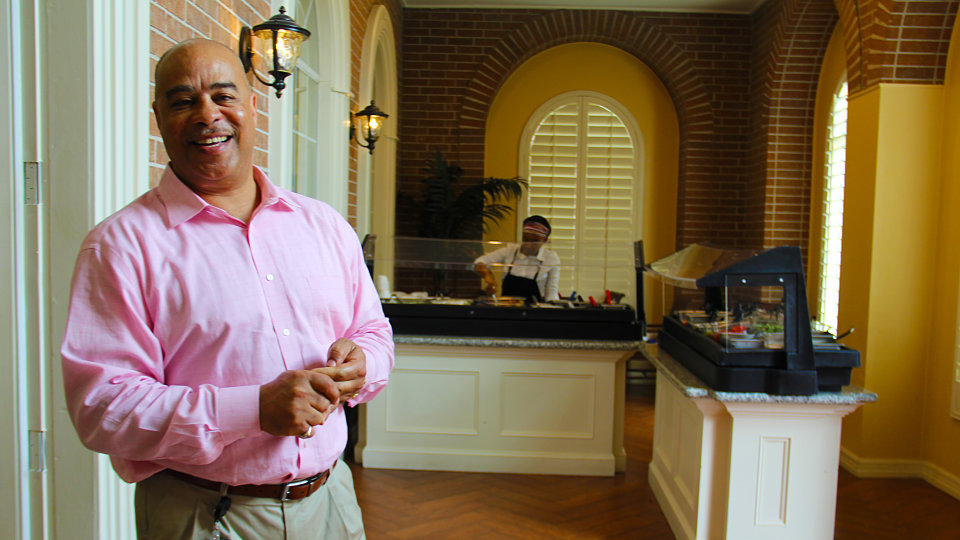 In the last seven years, Parkway Place assistant food service director Duane Davis has served as a foster parent for nearly four dozen children in Houston foster care. He and his wife currently have five foster children living with them, all between the ages of six months and six years old.

Their life, Davis says, is a busy series of controlled chaos.

But it only took five hours and four feet of flood water for this already busy Davis family to have their world turned completely upside down.

At 4 a.m. August 27, Davis woke suddenly to his wife telling him their house was flooding. Overnight, the home had collected two feet of water, with levels rising faster every minute.

“We went into survival mode,” Davis said. “Our first priority was to make sure the children were safe and weren’t traumatized by what was going on when they saw floating items in the water.”

Davis waded with each of the five children, one by one, through waist deep water to the daycare center that his wife and mother-in-law operate one block up the street. He made multiple trips, bringing wagon loads of supplies—food, water, bedding—to ensure his family could safely wait out the storm. Sometimes the floating yellow wagon would tip over, spilling belongings into the rising waters.

“I was wading in the water not knowing what I was walking into. I know I was being held by the hand of God to make sure those children were safe.”

Davis was stranded at the daycare and unable to return to work at Parkway Place for nearly a week. The residents and dining staff, however, were never far from his mind.

“My heart was torn,” Davis said. “I needed to take care of my family but I was worried about the residents. I wanted to make sure there was no interruption in food service and that the residents received a level of quality as close to normal as possible.”

In fact, the Parkway Place dining staff exceeded Davis’ expectations. Many stayed at the community for days on end, covering shifts to ensure every meal was served on time. Their job descriptions, Davis said, increased dramatically during Hurricane Harvey.

“It made me very proud to be part of a team of people who showed compassion like that and had a ‘We’ll do anything’ kind of spirit,” Davis said.

“Some things had to change temporarily during the hurricane, but the service and the staff’s willingness to keep people calm and ensure residents had an enjoyable dining experience never changed. They set the bar higher than anyone ever expected.”

Today, Davis and his family are living in a hotel. His home is destroyed, along with the family’s four vehicles. He and his wife are doing everything they can to ensure the foster children in their care are supported, loved and safe. Davis says his focus now is getting his family back to normal and serving the Parkway Place residents he loves.

“I feel blessed that I’m still able to come to work at Parkway Place,” Davis said. “We’re blessed to have this Buckner family and be part of these residents’ lives. I don’t know where the help we need is going to come from, but I put that in the hands of the Lord.”