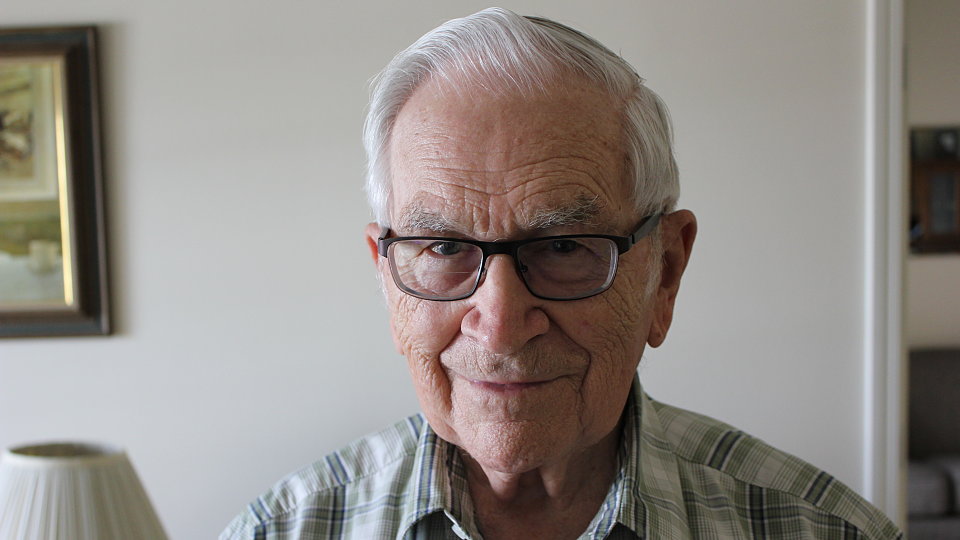 On March 23, 1945, the now 91-year-old Buckner Villas resident was left for dead after German troops attacked his division during WWII. Shrapnel from an enemy artillery shell grazed his face, struck his chest and created such carnage that his fellow soldiers knew he could not have survived. They picked up his weapon and continued on.

Little did they know that a small, pocket-sized Bible had just saved their comrade’s life.

Hours later, Morrison regained consciousness and caught up with his division. The medics who treated his injuries noticed a hole in his jacket and removed his Bible—the one he carried with him in combat. Three quarters of the way through the New Testament, the near-fatal piece of shrapnel was lodged over 1 Corinthians 15:10, which reads, “But by the grace of God I am what I am, and his grace toward me was not in vain.” Without that Bible right where it was, Morrison says, the shrapnel would have punctured his heart.

“I am blessed to be alive,” Morrison said. “That Bible holds a special place in my heart, and every time I look at it I am reminded how lucky I am. I went to church sometimes, but I was never really religious before. After the accident I knew there had to be a God.”

Morrison was born in 1926 on a small dairy farm in Wisconsin. After graduating high school in 1944, he tried to get into the Navy but failed the physical exam. Per his father’s advice, he then moved to the city to get a job and better his chances of being accepted into the armed forces. He was drafted into the Army six weeks later and served there from 1944 to 1946.

Morrison spent more than a month of his first service year in the hospital, first for mumps and frostbite, then for scarlet fever. It was the March 23 accident, though, that earned Morrison the Purple Heart, a military decoration awarded to those wounded or killed while serving.

“To this day I remember what I saw when I was unconscious,” Morrison said. “It was my younger sister and brother who were right there with me. It’s something I will never forget.”

Morrison returned to the United States on July 20, 1945. The Army granted him a 30-day furlough, so he returned to Wisconsin and married his sweetheart before reporting back to Camp Swift. In April 1946, Morrison received an honorable discharge from the Army as a corporal.

He went back to Wisconsin and held various jobs before moving to Austin in 1970, where he worked for the Travis County Tax Accessor’s office until retiring in 1991. He recently moved to Buckner Villas, a senior living community in north Austin, and is a member of the Military Order of the Purple Heart, Texas Capital Chapter 1919.

“Don is an American hero, and we are honored that he calls Buckner Villas home,” said Doyle Antle, executive director of Buckner Villas. “His story of survival is riveting, and we are thankful for his service. This Veterans Day we honor all of the veterans living at Buckner Villas, including Don. They put their lives on the line for us, and I hope they know we are forever grateful for their sacrifices.”