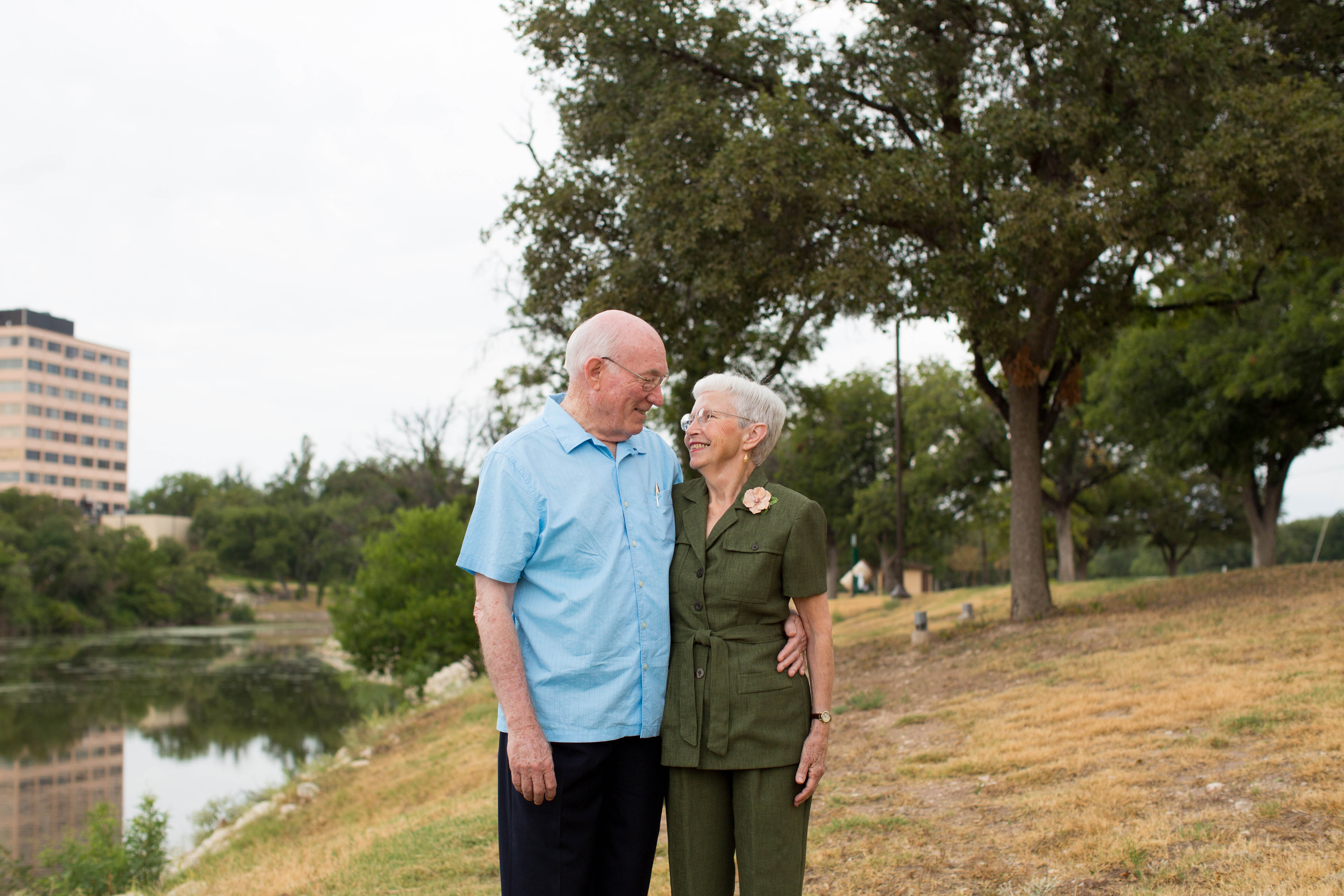 Last month my daughter got married. During the ceremony, she and her husband gazed at each other adoringly and joy seemed to exude from every pore in their bodies. I found myself wondering, Have any two people ever been so in love?

Even as I squeezed the hand of my darling husband of 32 years, I felt as if I could never have been as much in love with him as my daughter was with her man on their wedding day.

Or maybe, I mused, love just looks more radiant on young faces. Could love possibly have a shelf life? Does it have “planned obsolescence,” like modern technology?

So I did a little research.

What I learned boils down to this: Even a marriage that’s about to smash up against the rocks (barring physical or emotional abuse or criminal acts) can tack its way back into calm and pleasant waters.

We’re not just talking about doing damage control. “It’s almost never too late to start the process of falling in love all over again,” says James Córdova, Ph.D., chair of Clark University’s psychology department and head of Clark’s Center for Couples & Family Research.

Taking Too Much for Granted

“One of the things that happens in long-term marriages is that the demands of everyday life steal our attention away from our partners — and paying attention to the other is crucial for happy relationships,” Córdova says. This lack of focus on your spouse slowly unravels the fabric of a solid relationship.

Sometimes the disintegration happens over a number of years, during which the couple exist in a kind of emotional limbo. Córdova notes that, statistically, it takes couples up to six years to seek help or advice after they’ve reached a tipping point. And that, he says, only increases the impact on the marriage.

Fritz Galette, Ph.D., a family therapist who hosts the weekly “Ask Dr. Fritz” on New York City’s WWRL, agrees. “By the time I see couples, they’re often in crisis,” he says. “The discontent has been festering for years.”

And yet experts believe that even in cases where the discontent has been on a low boil, there are still ways to revive the old passion.

5 Ways to Restoke the Fires of Love

Galette and Córdova both recommend that couples in crisis seek professional help, whether from clergy or family/marriage therapists. On top of that, the following steps — first discussed and then put into practice — can help salvage a troubled marriage.

1. Act like you’re in a new relationship. Galette recommends that couples ask each other the kinds of questions typical of new daters’ “getting to know each other” conversations.

Jill Kaplan*, whose 28-year-old marriage had been feeling flat, realized that she and her husband, Todd (names have been changed), had fallen so out of sync that the things she was doing to please him were actually annoying him. “I thought he wanted me to watch sports on TV with him,” she says. “I really didn’t always want to, but I kept it up for him.”

It took a close friend, who observed the tension in the family room, to get Jill to ask Todd if he really wanted her company. She got a surprising answer. “It turned out that he preferred not to have me there if I wasn’t into the game!” Jill says.

“That was just the first question,” she adds. “Now we’re on to which family we want to spend holidays with and what clothes the other wears that we really like. It’s like he’s my new boyfriend. It’s like I’ve discovered a favorite old outfit in my closet: Todd looks good to me and yet our relationship has the spark of something new and special.”

2. Pay attention to your spouse. One of the biggest complaints Galette hears is that couples feel ignored by their mates. Spouses get used to one another and, over time, don’t really notice what they’re each going through.

“Sometimes people think they’re paying attention to their spouses but they really aren’t,” he says. “I advise couples to look into the other’s eyes when they’re having a conversation. It’s much easier to concentrate on someone’s words and share when your partner is looking right at you.”

Galette also promotes an effective technique called active listening. “When one person speaks, the other can’t interrupt. He must listen completely before he says anything — and then he has to respond.”

3. Share new experiences. For years, relationship experts (and every women’s magazine) have been advising couples to set aside time for “date night.” Córdova says that going out and doing things together on a regular basis and creating romantic rituals is good for a relationship. But it’s even better to try something out of the ordinary. Get creative and step outside your comfort zone.

Galette agrees. “Doing something new and different together, like taking tennis lessons — which is what my wife and I did recently — enhances your sense of intimacy.”

Karen and Bob Callahan, a couple who had thought their next step was divorce, breathed new life into their marriage when they reluctantly took a kayaking course together. “Neither one of us is particularly athletic, so when our pastor [whom they had seen for counseling] showed us a brochure, we both thought, Why not?” Bob says.

“Actually,” Karen adds with a laugh, “my first thought was, ‘If we both drown, it couldn’t feel as bad as how miserable I am now.’”

It turned out that kayaking didn’t take too much athletic prowess, and the two had a terrific time paddling around a local lake. “We started making up stories about the fancy houses we saw and soon we were laughing so hard we almost tipped,” Karen says. The weekend after they received their “certificate,” they booked a B&B on the lake, where they spent less time kayaking and more time just enjoying being together.

4. Be affectionate — physically and verbally. Research has established that touch communicates a wider range of emotions than mere gestures. “The science of touch suggests that a pat on the back, a squeeze of the hand, a hug or an arm around the shoulder can save a so-so marriage,” writes Sonja Lyubomirsky, Ph.D., a professor of psychology at the University of California, Riverside. “Introducing more (nonsexual) touching and affection on a daily basis will go a long way in rekindling the warmth and tenderness.”

According to Córdova, however, this prescription for tenderness must also include loving language — and it needs to be heartfelt. “I love you” should be more than a reflexive recitation of syllables at the end of a phone call. Instead, say something affectionate and sweet at unexpected times.

Loving phrases can — and should — be sprinkled generously throughout your interactions. Tell your spouse he’s amazing while you’re eating dinner. Compliment your wife’s problem-solving abilities while trouble-shooting a plumbing problem.

5. Always be kind. “It’s not important whether your partner is ‘succeeding’ or ‘failing’ when your goal is to have a genuinely loving relationship,” says Córdova. “If your partner shows up late, no matter how annoyed you are, you can still respond with kindness.”

“When Bob and I began paying true attention to how we were communicating,” says Karen, “we realized that we were [venting] when we could have easily let the issue roll off our backs.”

So they tried an experiment. One Saturday they left a recorder running. “We were shocked when we listened to it later,” says Bob. “The way we were responding to each other made us cringe. It was exactly the kind of negative communication that makes people uncomfortable when they see it in others.”

To find a remedy for that habitual behavior, Bob and Karen made lists of 10 things the other did that bugged them and wrote down their usual responses. “Then we looked at each other’s lists and discussed how we could communicate our feelings without being hurtful,” says Karen.

Once you start being intentionally kind, says Córdova, “the interaction goes to a new place — the kind you would prefer in a happy marriage.”

But, he cautions, “Being kind when you’re not feeling that way takes practice. It doesn’t come naturally at first, but it can turn into a habit.”

While we can’t realistically expect our long-term partner to be the exact same person we married, Córdova says, that may be a positive thing. “It’s like you have a whole new person there beside you — someone you can date, with all the benefits of already being married.” Ultimately, he adds, it’s not so much about going back to what you had before. It’s more about going forward and building something new and better suited to who you’ve each become.