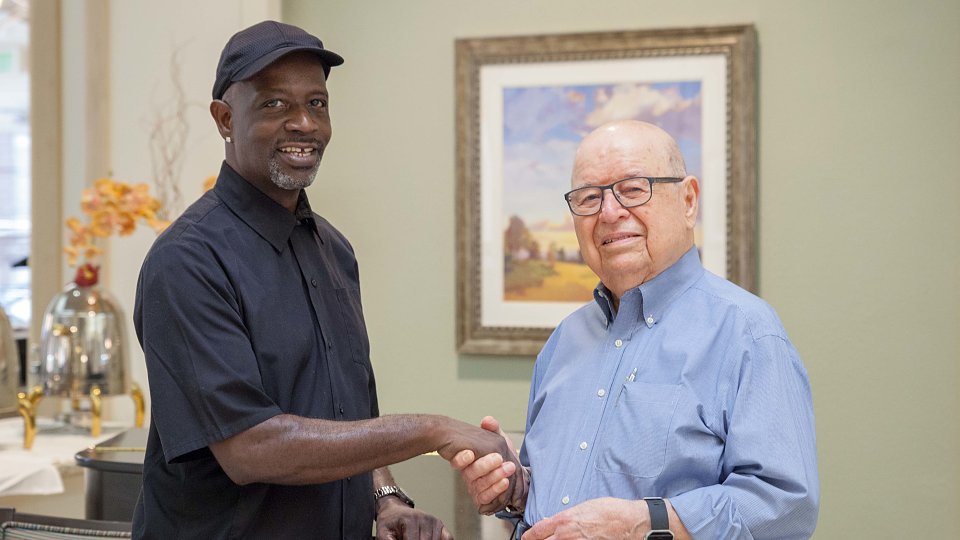 In late August 2017, Hurricane Harvey made landfall across southeast Texas, leaving a trail of damage, loss and destruction in its wake. For several days following the storm, flooding overtook much of the area, forcing many to abandon their homes and possessions.

Daniel Madison, a utility worker at Buckner Parkway Place, was one victim of Harvey’s wrath. With only the clothes on his back, his wife and a small bag, Madison found refuge somewhere most would never think to look: his place of employment.

“My wife and I stayed at Parkway Place for two months until we got back on our feet,” he said. “Everyone did what they could to make things easier for us and make us comfortable. I was blessed.”

The senior living community’s hospitality toward Madison was simply an added benefit. His motivation to be there, however, was not to seek his own comfort. It was to serve others.

“We were short-staffed. I was just trying to get over there to help and do what I could,” Daniel said. “I knew we were needed.”

Touched by the selflessness of staff members like Daniel, the Parkway Place community decided to act. They wanted to find a way to give back to the people who had given so generously of themselves during such difficult circumstances. Aaron Mendoza, a member of Parkway Place since 2009, worked with a few others to organize a fundraising effort.

“These employees go all-out to serve us, so we felt that it was our time to help them,” Aaron said.

The task was large and proved to be more challenging than expected.

“We had to have a lot of discussions about when to give the money, how much to ask for and where to deposit it. I was a believer that we needed to do it as quickly as we could. These people needed help now, not later,” Aaron said.

With determination and a little bit of problem-solving, everything came together. The members of Parkway Place raised over $20,000 to aid staff members who had lost everything to the storm.

“I’ve always felt, all my life, that it’s better to give than to receive. I try to help people wherever I can,” Aaron said.

A year later, Daniel and his wife, recipients of the fund, have a new apartment close to Parkway Place and are doing better than ever. Though the trials of Harvey will not be soon forgotten, the love and servant-heartedness shown among members and employees at Parkway Place is more powerful than any hurricane.

“Parkway Place members are like God’s helpers. Without them, I wouldn’t be sitting here right now. They took me in and they never looked back,” Daniel said.