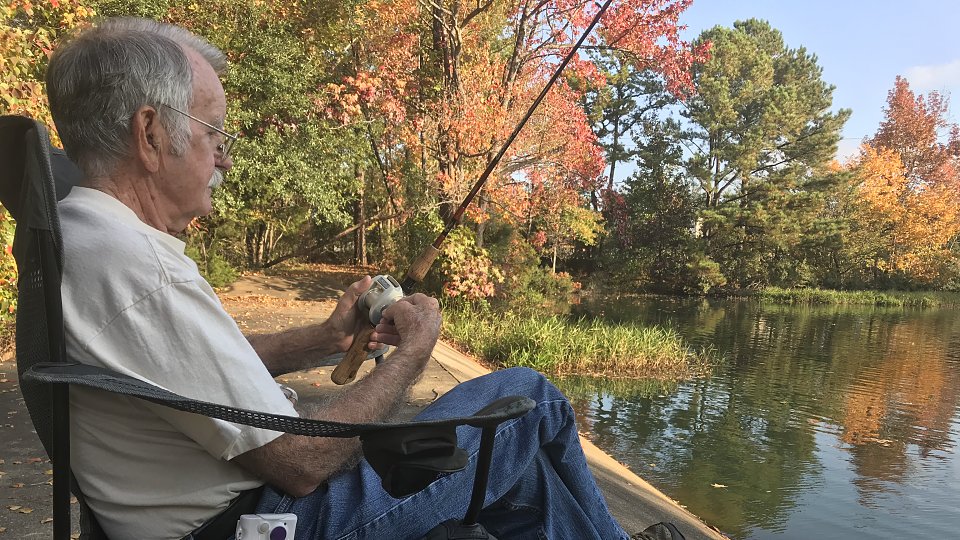 Some people choose a senior living community for its friendly atmosphere, five-star dining or luxury amenities.

For Jerry Blissette, however, it was the fishing pond at Buckner Westminster Place that sealed the deal.

“The pond is right outside my window,” said Blissette, “and I can fish as often as I want!”

At 81, the East Texas native has been fishing since he was five years old. He remembers his dad taking him to a small creek near their house, fishing for a few hours, and then bringing the catch home to his mother. She’d fry up the winnings to feed her growing family of two girls and three boys.

“I couldn’t get enough of fishing,” Blissette said. “It didn’t matter how big the fish were, I just loved to be out there. And I haven’t stopped since.”

Blissette has fished all over North America, from Mexico to Canada and even Alaska where he caught salmon. Many of the fish he’s caught through these expeditions are mounted in his independent living apartment.

Now, Blissette fishes every day at Westminster Place, anywhere from 30 minutes to an hour. He’s only missed a few days since moving to the community with his sister in October, and even then just for weather. Every day, he catches three or four fish before throwing them back.

The dining staff enjoy Blissette’s fishing hour almost as much as he does. They often join him outside after their lunch shifts, sitting under a pavillion while he sits in his fishing chair. Each time he catches a fish, they cheer.

“It’s like I have my own cheering section,” Blissette laughed. “Everyone here at Buckner is like family. My sister and I wanted to decide where to move while we could still make the decision for ourselves, and I’m so glad we picked Buckner.”

And after 76 years of fishing, Blissette doesn’t plan on stopping any time soon.