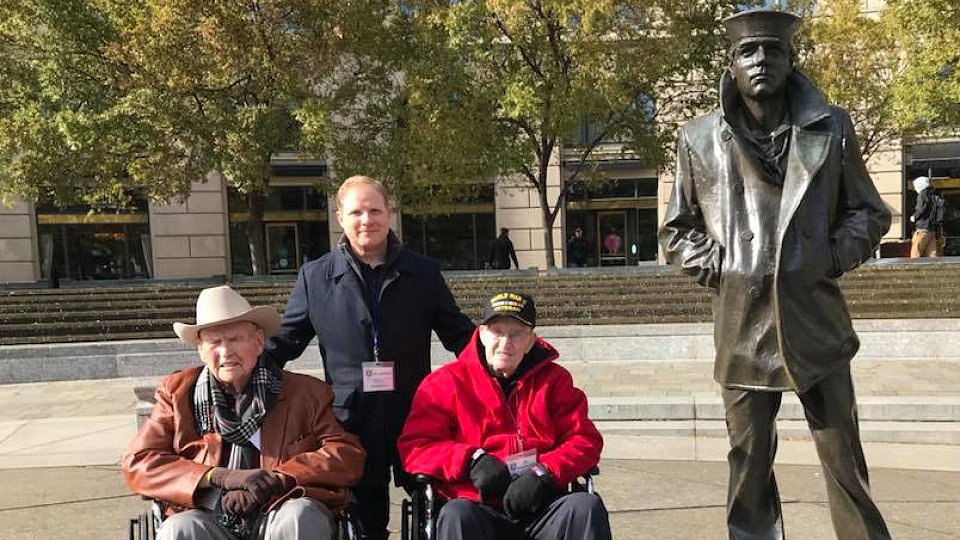 It all started at 10 a.m. Friday, Nov. 10, with my arrival to Austin-Bergstrom International Airport.

I was greeted by volunteers in blue shirts for my first opportunity to serve as a guardian on an Honor Flight Austin trip to Washington D.C. This particular trip was unique for a couple of reasons. First, it was the first Honor Flight Austin trip held on Veterans Day. Second, we were privileged to have WWII, Korean War and Vietnam War veterans all on the flight—three generations of soldiers, sailors, airmen and marines who fought unselfishly to defend the freedom we enjoy today.

On this day, I met my heroes.

I was in complete awe of these men and women as we journeyed together to see our nation’s memorials to the wars in which they fought.  We traveled by police escort through the streets of our nation’s capital, visiting the White House, war memorials and other historical icons built to honor their sacrifices. The experience left an imprint on my heart and life forever.

Two WWII veterans especially captured my heart: BC Knowlton and James Leavelle. Both served in the Navy during WWII and are part of the nation’s greatest generation who tell stories one would normally only see in movies.

Leavelle, for example, told how he escaped from Pearl Harbor on that day of infamy. After the war, he joined the Dallas Police Department. On Nov. 24, 1963, he was photographed handcuffed to Lee Harvey Oswald when Oswald was shot shortly after President Kennedy’s assassination.

As a fellow Navy veteran, I often wondered about those that had served before me. And while I have worked professionally among so many veterans who served country over self, the Honor Flight was one of those trips that will have a lasting impact on my life. I was surrounded by the bravest of men, their sacrifices born out of a love of their country and desire to protect their fellow man. Thank you to our WWII veterans who faced tyranny close and far to protect the veil of freedom I experience today.

Brian Robbins currently serves as the vice president of operations for Buckner Retirement Services. He is a Navy veteran and earned three Navy and Marine Corps achievement medals during his 11 years of Naval service. Honor Flight Austin is a nonprofit organization that takes veterans on VIP trips to Washington D.C. to visit their war memorials.