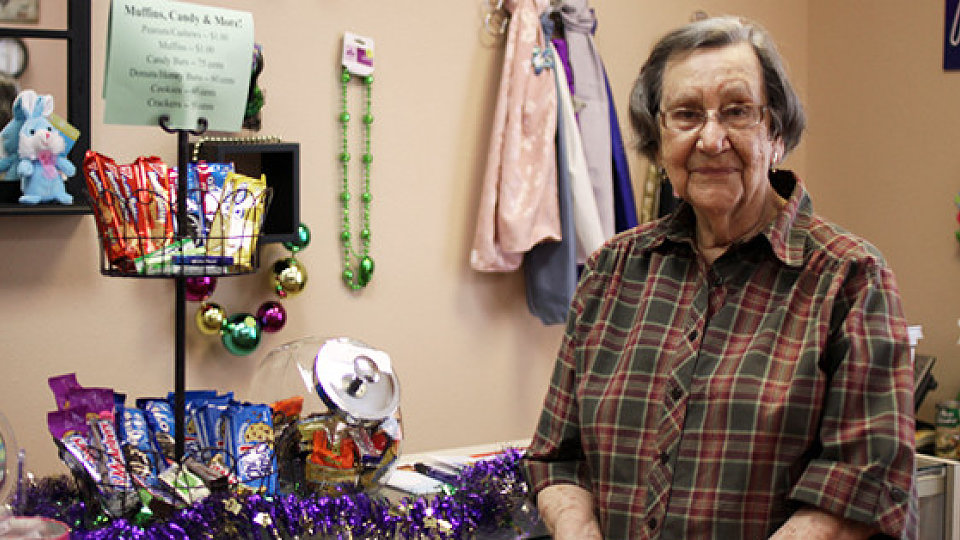 Connie Dickinson, a resident at Calder Woods in Beaumont, began doing volunteer work in her community 27 years ago and has been going strong ever since. Nothing seems to slow her down – even at 97 years old.

Dickinson estimates she has volunteered more than 13,000 hours at Baptist Hospital. She started volunteering there in 1987 when it was still the Medical and Surgical Hospital.

“After I retired I decided I needed to do something to occupy my time,” she says. “I didn’t want to be bored just sitting around the house doing nothing. I wanted to be out with people.”

Dickinson volunteers three or four days a week at the hospital’s information desk where she answers the phone and greets visitors. She still drives herself across town to the hospital. In addition, she works one day a week at the Calder Woods Coffee Café & Gift Shop.

A widow, Dickinson moved to Calder Woods in 2007. She had retired from Sun Oil Co. where she worked 25 years in the company’s oil accounting department. She and her husband, Murray, were married 59 years before his death in February 2002.

“After my husband died, I decided I needed a place to live where I felt safe,” she says. “We didn’t have children and I didn’t want to be a burden on anyone.”

Dickinson has an older sister who also volunteers at a hospital in Memphis, Tenn., where she lives. She turns 100 years old in July.

“I intend to beat her record and work longer than she does,” Dickinson says with a laugh.

Penny Pearson, volunteer coordinator with the Retired Senior Volunteer Program in Beaumont, says she loves to see so many seniors like Connie giving their time and talents as volunteers.

“Giving back to their community is one of the biggest reasons that seniors volunteer,” she says. “They find and make new friends and learn new skills. It’s also a great way to stay healthy, mentally and physically. But most of all, it is a rewarding experience.”

Dickinson, who turns 98 in October, agrees. She says volunteering makes her happy and gives her something to look forward to every day.

“I feel like I get more out of it than I give,” she says. “At the end of the day, I feel like I’ve helped somebody.”