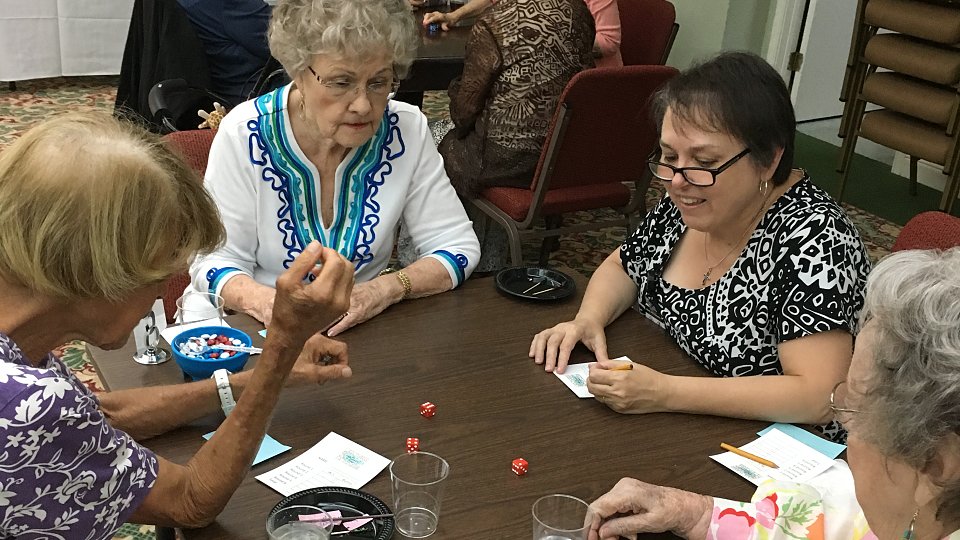 80-year-old JoAnn Wenske, a resident of Parkway Place in Houston, is an avid bridge player and never misses the opportunity to hone her card skills.

But when she and her friends learned that Bunco, a dice game typically dominated by a younger crowd, was making its way to senior generations, they knew they couldn’t be left out of this growing fad.

“It’s a great way to keep our minds sharp and alert while socializing,” said Wenske. “Playing Bunco was one of the best evenings I’ve had. It’s exciting to learn something new, and our Parkway Place staff really hit it out of the park with this game. We love it!”

Wenske is from Yoakum, Texas, and had always heard “the young kids” talking about the game and was eager to give Bunco a try. Other residents decided to join because their daughters play in Bunco groups.

“When we first started I didn’t expect to catch on so quick, but I did,” Wenske said. “When you think of bridge or other social games, they tend to be hard to pick up on, but Bunco was easy for us. I look forward to playing each month and getting more residents to join each time.”

The community only recently began offering the game, but has seen more than two dozen residents participate each time. None had ever played Bunco before the community hosted its own games.

According to AARP, scientists believe that social interaction is key to maintaining good mental health and warding off disorders such as dementia and Alzheimer’s disease. Many recent studies document the positive effects of social interaction. Research also shows that friendship boosts happiness, reduces stress, improves self-confidence and encourages positive change.

“We’ve had a great response to the game,” said Mary Green, life enrichment coordinator. “It’s especially rewarding to know that many of the residents can share Bunco stories with their daughters or granddaughters who also play with their friends. We love adding trendy and interesting activities as options in our community, and we are already looking forward to the next game.”