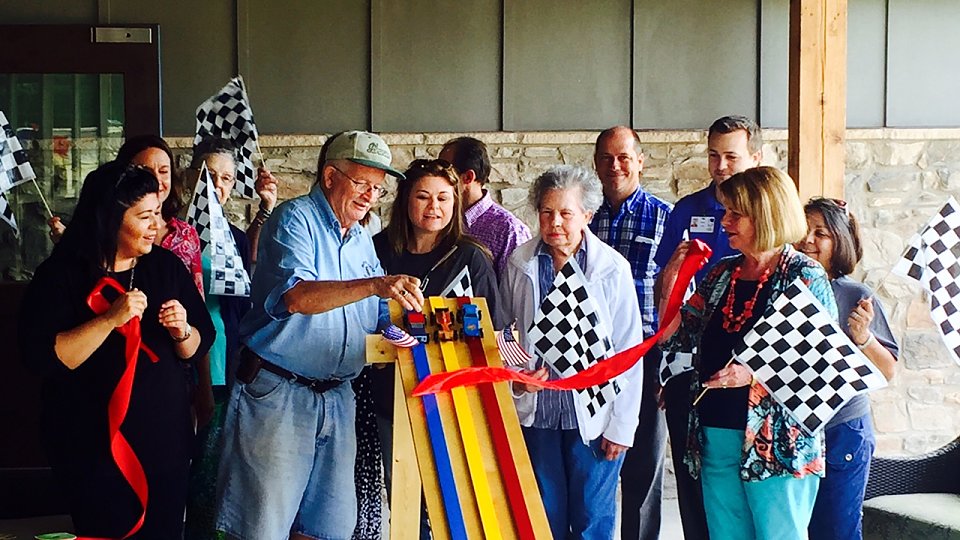 SAN ANGELO, Texas,– When Bruce McLaren, a Baptist Retirement Community resident, heard about the wish to bring a pinewood derby racetrack for the community to enjoy, and that a racetrack would exponentially benefit those living with Alzheimer’s and dementia, he eagerly signed up for the job.

McLaren created the track himself to provide a place for retirement residents to race cars, much like they did in their youth. Many Baptist Retirement residents raced derby cars during their Boy Scout days, and several have since helped children and grandchildren build the cars for competition.

“When seniors are living with Alzheimer’s and dementia, memories from their youth are some of the last to go, staying the most vivid in their minds,” said Bridget Hinrichs, life enrichment coordinator at Sagecrest Alzheimer’s Care Center at Baptist Retirement Community. “My hope is that this activity ignites memories and recreates those warm feelings from their youth and time as young parents.”

McLaren’s father was a carpenter, so he has a strong background in woodworking. He also has a growing collection of power tools and hand tools, most inherited from his father. McLaren uses the tools to make almost anything, from tables and chairs to beds and cedar trains.

He enjoys building new things, and contributes to the Baptist Retirement Community Craft Show each fall. Just last year, he built a Little Free Lending Library House in which residents may swap books for reading. The derby track, which measures a full 32 feet long, took him four months to complete.

“Building it was not so complicated, but it took a lot of work to cut, fit, sand, prime and paint each piece,” McLaren said. “I’m proud of it and the purpose it will serve. I can’t wait to see everyone enjoying it.”

“It is important to stay active and engaged at any age, as it keeps us well and improves our quality of life,” said Quinda Feil-Duncan, executive director of Baptist Retirement Community. “We should focus on staying active our entire lives. It’s never too late to start being more involved and to try new things. We are thankful that Bruce took the time and the initiative to do something really special for the community’s memory care residents.”