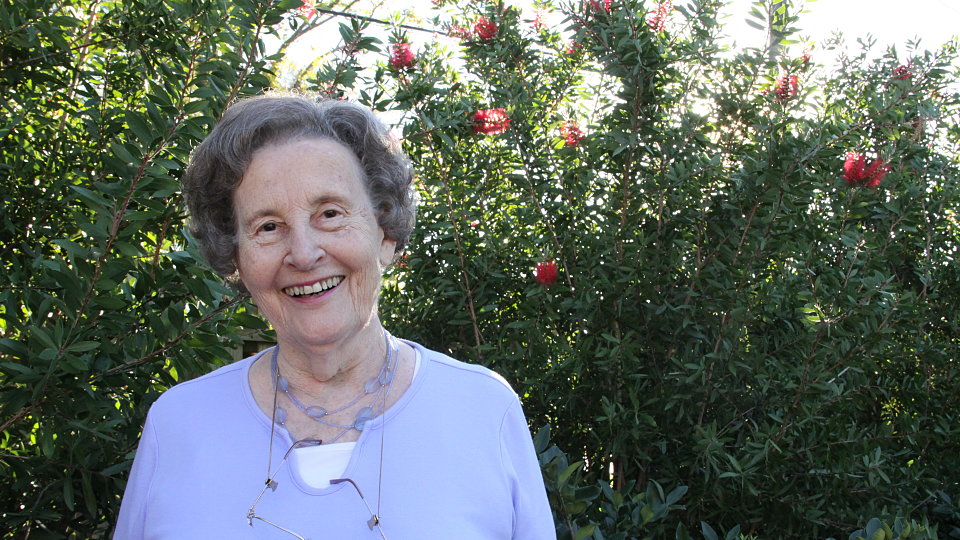 Evelyn Lord is the kind of woman smart little girls want to be when they grow up. She’s had it all: a long and loving marriage, an illustrious career, five children and countless adventures.

Today, she lives in an independent living town home at Calder Woods in Beaumont. This week she’s being honored at the LeadingAge Annual Meeting and EXPO, a national gathering of senior living providers, for her dedication to community development.

People most know Evelyn as the former mayor of Beaumont. In fact, she was Beaumont’s first “woman mayor,” according to a 1994 article in the Houston Chronicle. Evelyn knows well how far women have come in politics. She helped break that glass ceiling.

Evelyn grew up listening to narrow views of a woman’s place. Her father, an Austrian-born immigrant, believed women’s lives should be devoted to three things: “Kinder, Küche, Kirche,” or “children, kitchen, church.”

Her traditional New England mother didn’t approve of her interest in “dirty politics,” either. When Evelyn won her first political victory—class president in college—she lost her allowance for three months.

“When I was elected a state senator in Delaware a few years later, they wouldn’t come and see me sworn in,” she said. “They did send me a present, though. It was my grandfather’s ‘Vote NO on Woman Suffrage’ button. I give courses in communication, and there’s a communication for you.”

The button became a charm she faithfully pinned under her collar each day. She kept her hand on it when she spoke on the floor of the state Senate, imagining what her grandfather would think if he could see her there.

“I know they worried about me, because politics was dirty back then, especially in New York and Boston, where the mafia was involved,” she said. “And especially since I was a mother with little children.”

It took years, but her parents eventually came around and said she made them proud.

Her husband, Sam, was more supportive. Partnership defined their marriage. They sacrificed for each other and made each other’s goals a priority throughout their life together.

Eventually, Evelyn became president of a new chapter of the League of Women Voters and attracted the notice of both Republicans and Democrats, which led to her election ot the Delaware State Senate. She served from 1962 to 1964 and was one of only 33 female state senators across the entire U.S. at the time.

She graduated from law school in 1969, and two years later Sam’s job sent them to Londonderry in Northern Ireland. Even in a foreign country, Evelyn found ways to get involved. She provided meals to shut-ins, volunteered at a local hospital, chaired a Save the Children group and wrote a weekly column for an American newspaper.

In the mid-70s they moved to Beaumont where Evelyn served two terms on the city council. Just as she began making plans for her first campaign for mayor of Beaumont, Sam learned he was being transferred back to Northern Ireland.

They returned to Beaumont after Sam retired in 1988 and Evelyn finally had her chance to run for mayor. She served three two-year terms and one one-year term between 1990 and 2004. She and Sam also served together on dozens of boards, committees and councils through their years in Beaumont. They were happily married for 63 years, until he died in May 2011.

“I’ve been an extremely fortunate woman,” she said. “I know I have been. We each married a person who got more from the other than they really expected.”

Though her days in politics are over, public service runs in Evelyn’s blood. She still serves on several boards today, and her wisdom has made her indispensable to organizations like The United Way, The Salvation Army, the Boy Scouts and Girl Scouts of America councils, the Evelyn M. Lord Teen Court, and many other foundations, committees, museums and organizations. At the same time, she said she knows when to sit back and let the next generation of leaders do their thing.

“I’ve been president of most of the boards I’m on, so now, it’s kind of fun just to sit there and practice keeping my mouth shut,” she said.

Evelyn plans to write a memoir some day and there’s no doubt it would be a riveting read with her tales of sexism in politics, IRA bombings at her local grocery store in Northern Ireland and volunteer missions with Radio Free Europe in East Berlin, just to name a few. Until then, she continues doing what she does best—finding places where she can contribute and ways to make her community better.