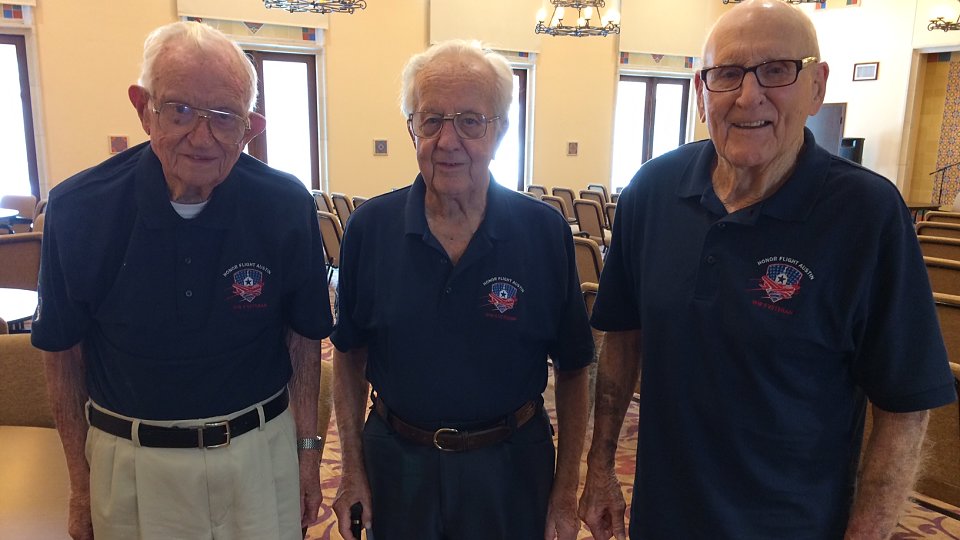 Three World War II veterans who call Buckner Villas home will take a trip of a lifetime today. David Moore, 92; George Walker, 91; and Herb Witzel, 93, will travel from Austin, Texas, to Washington D.C. thanks to Honor Flight Austin, a nonprofit organization focused on funding trips for veterans to visit national monuments and memorials. The members of Buckner Villas are three of nearly 40 veterans who will take part in the free Thundercloud Appreciation Flight.

“Several people told me to go on the Honor Flight, and I am thrilled to finally go,” David said. “I know I will always remember the experience. I know this trip is a privilege, and it will be emotional for me. I am grateful to everyone for helping me go on this journey.”

David was born in Alabama and joined the Army in 1944. He served in Germany and Belgium during World War II in the 750th tank battalion as a crewman on a medium tank. He then served in the Army of Occupation with the constabulary patrolling the border between east and west Berlin. After World War II he went to college on the GI Bill at the University of Alabama and graduated in 1951. He then rejoined the Army as a second lieutenant. David retired from the Army in 1975 after 31 years.

For George, the trip will give him the chance to honor relatives who died while serving.

“I have never seen the National World War II Memorial,” he said. “I had two cousins killed during the war, and I will look for their names to pay tribute. Honor Flight Austin is truly amazing, and I am thankful for the opportunity to share my experiences with other veterans.”

George grew up in West Texas and graduated high school in May of 1944. He went to Texas A&M University until December of 1944 when he turned 18. He then volunteered to join the Navy and began six weeks of flight radio training in Tennessee before transferring to the V-5 pilot training program. After leaving the Navy in 1946, George attended and graduated from the University of Texas. He held several jobs including a teacher, as well as a sanitarian with the health department before starting the Kwik Wash Coin Laundry business in Austin.

The trip David, George and Herb will go on includes a special ceremony at the World War II Memorial as well as visits to the other service memorials. Veterans will also get the opportunity to lay a wreath at the Tomb of the Unknown Solider.

“I find it fascinating that this organization helps so many veterans witness the war memorials and Arlington National Cemetery firsthand,” Herb said. “I have to say, I am really looking forward to seeing the World War II Memorial.”

Herb is from the Northeast and joined the Army right out of high school in June of 1943. The World War II veteran was a technician fifth grade (T-5) and was stationed in California and Hawaii. He worked on radar for anti-aircraft weapons, specifically for 120 mm M1 guns. While stationed on the island of Oahu, Herb oversaw coastal control for Pearl Harbor. In 1946, he left the Army to pursue a career in education. He retired after nearly 40 years.

“We welcome speakers who come to the community to describe Honor Flight Austin and explain how veteran members can participate,” said Janet Burnett, life enrichment coordinator at Buckner Villas. “I am thrilled to see three members who are all World War II veterans going on this upcoming trip. “You don’t see as many World War II veterans today, so for them to be able to fly to D.C. and see the World War II Memorial is truly amazing.”